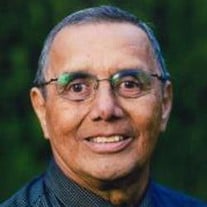 Ruben Richard Gomez, 70, of West Valley City, Utah passed away on April 15, 2015 with his loving family by his side. He was born on November 8, 1944 to Antonio (Martinez) Gomez and Bartola (Venegas) Lopez. He is survived by his wife, three children, nine grandchildren, and four siblings. He graduated from Granite High School, Utah in 1963 where he enjoyed Stage Crew. He was a Veteran of the U.S. Army. Ruben worked in sales with a strong work ethic in which he taught his children. He married his sweetheart, Linda Johnson Gomez in October 1969. Together raised three sons; Richard (LeAnn), Robert (Annamarie), Roger (Brandy) and was very proud of his grandchildren; Rachel, Mia, Jorgia, Antonio, Rozlin, Tobias, Samantha, Kamron, RyAnne. In raising his children, Ruben enjoyed coaching Little League football, recreation soccer. He was a proud leader in the Scouts Program at St. Ann’s Catholic Church. Ruben enjoyed taking his family on camping trips, hunting with his brothers and friends, watching his Broncos football team, attending the Utah Utes football games, and watching the RSL Soccer games. Every year he looked forward to opening his house to family and friends to watch the Super Bowl. In his free time, he would complete puzzles with his wife, listen to oldies, play solitaire, video poker, spider 21. Ruben would talk about his teenage days of racing cars down State Street, and his like for 1957 Chevy’s. He was a great mechanic by trial and error. He had a talent for jerry rigging anything. If what he tried didn’t work he would turn to his special tools of duct tape and WD40! When anything got lost or misplaced, Ruben was the man to call. He had the patience and special talent to find anything and everything big or small. He had fun coaching his grandchildren’s soccer teams. On most days, Ruben could be found sitting on the sideline cheering on his grandchildren at their soccer games. He looked forward to these games as much as the kids looked forward to seeing him there knowing he was their biggest fan. For this brought great joy and happiness to him. Ruben spent his time dancing with his wife, watching their evening TV shows together over a big bowl of ice cream. (Ruben’s other love!) We will cherish our husband, father, grandpa, and brother for his kind heart, generosity, friendly smile, willingness to help others and for treating everyone as family. We will remember him for his 3 Musketeers, pocket full of candy, sense of humor, contagious laugh and infamous greeting of “Jello”! A Vigil will be held at 7:30 p.m. on Monday, April 20, 2015 at the St. Catherine of Siena Newman Center, 170 South University Ave., SLC, UT 84102. A Memorial Service will be held at 10:00 a.m. on Tuesday, April 21, 2015 at the Chapel at the Utah Veterans Memorial Park, 17111 S. Camp Williams Rd., Bluffdale, UT 84065, Interment with Military honors will follow the services. We thank Harmony Home Health and Hospice for the loving care given to Ruben. In lieu of flowers, donations of your choice appreciated in dedication to Ruben Gomez: VA Salt Lake City Health Care System: www.saltlakecity.va.gov/giving/index.asp Huntsman Cancer Institute University of Utah Health Care. www.healthcare.utah.edu/huntsmancancerinstitute/giving/huntsman-cancer-foundation-online.php

Ruben Richard Gomez, 70, of West Valley City, Utah passed away on April 15, 2015 with his loving family by his side. He was born on November 8, 1944 to Antonio (Martinez) Gomez and Bartola (Venegas) Lopez. He is survived by his wife, three... View Obituary & Service Information

The family of Ruben Richard Gomez created this Life Tributes page to make it easy to share your memories.