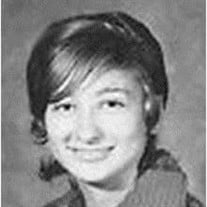 Ruby Edna Driskill Richard “Ruby Sue” Ruby was born January 14, 1956 in Seminole, Oklahoma. Known as Edna to her family, she was the youngest of eight children, born to parents Cecil and Ethel Driskill. She died June 3, 2017 in Salt Lake City, Utah after a 2 month fight with Kidney, Heart and Lung failure, her loved ones were by her side. Edna attended Varnum High School and was the mother of four children- Paula Anne Heffley, Pamela La Dawn Heffley-Rimer, Danny Ray Parks Jr and Melissa Renea Parks. She has 15 grandchildren and 1 great-grand child. Edna worked as a waitress and cook, Cab driver and Truck driver. Her family referred to her as a “Free Bird.” During one of her “Free Bird” times, she landed in Utah. The past 13 or so years have been with her companion, Steven Roestenburg and Utah family. We have known her as Ruby, or fondly as “Ruby Sue.”Her Utah family consists of her late mother in law- Lois Young, brothers in law: Bob Roestenburg, Garon Yoakum and family and sister in law, Jololene Allan and family. Ruby loved her other 2 children- Jessica and Sadie Roestenburg and her current cat Prince. She also loved and leaves many friends. Ruby was known for her stories, contagious laugh, bright smile and love. She enjoyed puzzles, crocheting, cooking, flowers, cats, singing and dancing with friends and TV game shows. Steven and Ruby were cut from the same time and fabric of life- together they have made quite the pair of “Free Birds.” A Celebration of Life will be held Saturday June 10, 2017 at Steve and Ruby’s home in West Valley, from 11-2 pm. Fly free Ruby, we love you and will miss you.

Ruby Edna Driskill Richard &#8220;Ruby Sue&#8221; Ruby was born January 14, 1956 in Seminole, Oklahoma. Known as Edna to her family, she was the youngest of eight children, born to parents Cecil and Ethel Driskill. She died June 3, 2017... View Obituary & Service Information

The family of Ruby Driskill Richard created this Life Tributes page to make it easy to share your memories.