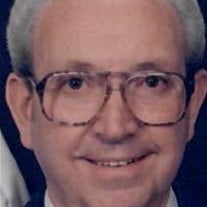 Rulon Dean Bickmore, 91, devoted husband, father, grandfather, son, and brother, passed peacefully to Heaven on November 18, 2019 In Salt Lake City. He was born to Rulon Smith Bickmore and Pearl LaReta Wahlen Bickmore on December 20, 1927, in Logan, Utah. His loving family included his sister Betty Jane Davis (deceased) (Lee) and brothers John J. Bickmore (deceased) (Diane Tueller) and Gerald W. Bickmore. He married his beautiful sweetheart, Ida Ludene Andrews, on January 8, 1953, in the Logan Temple. She died on October 8, 2007. Rulon was raised in Logan, Utah, and moved to Salt Lake City his junior year of high school. He graduated early from East High and enlisted in the U.S. Navy on Valentine’s Day in 1946. He served active duty for two years in the Pacific. He also served in the U.S. Army Reserve ROTC. He returned to Logan to attend Utah State University. There he met and married our sweet mother, Ludene. He graduated from USU with a bachelor’s degree in business administration in 1952. While attending Utah State, he belonged to the Sigma Alpha Epsilon fraternity. He attended graduate school at the University of Utah and worked for Sears at 8th South and State in Salt Lake City. Dad had many talents. He was a ski racer and won many ski competitions. He and Ludene were ballroom dancers. He was the life of the party; and even at age 91, Dad still had his sense of humor. His most treasured talent was his gift of music he inherited from his mother. He loved to stand by the piano with anyone who would play for him while he sang. He loved music and shared this talent freely with his family and others. His beautiful, natural tenor voice could be heard in the halls of The Abbington Senior Living Center even as late as last week. Rulon began his career calling on stores in California selling Wolverine shoes while his new bride waited for him in the car. He continued in retailing and began a 35-year career with JC Penney in the Twin Falls, Idaho, store in 1953. His career with JC Penney included management positions in Ogden, Utah; Helena, Montana; Kenmare, North Dakota; and Cedar City, Utah, where he and Ludene settled and finished raising their children. In Cedar City he was involved in the community serving as Rotary Club President and as a member of the Chamber of Commerce. A devoted member of The Church of Jesus Christ of Latter-day Saints, he served in many positions including ward bishoprics. His testimony is a priceless gift to his family. He is the most honest man we have ever known. His family was his life. He cherished his beautiful wife and each of his children, grandchildren, and great grandchildren. He and Ludene are the parents of four children: Dean Andrews Bickmore, Salt Lake City, Utah; Craig Andrews Bickmore (Lori), Sandy, Utah; Janice Mae Bickmore Warner (Byron, deceased), Holladay, Utah; and Janae Ludene Bickmore Smith (Marty), Logan, Utah. Rulon and Ludene have 17 grandchildren and 21 great grandchildren with more to come. Funeral services will be held on Saturday, November 23, 2019, at 11 a.m. at the Evergreen LDS Chapel, 2125 East Evergreen Avenue, Salt Lake City, Utah. Viewings will be at the same location on Friday, November 22, 2019, from 6-8 p.m. and Saturday from 10-10:45 a.m. Graveside services will follow on Saturday at 3 p.m. in the Logan City Cemetery. In lieu of flowers, please send donations to the Missionary Department of The Church of Jesus Christ of Latter-day Saints. As his family, we wish to extend a very special thank you to the caregivers at The Abbington of Holladay for their love and compassion for Dad and all of the dear residents there

The family of Rulon D Bickmore created this Life Tributes page to make it easy to share your memories.