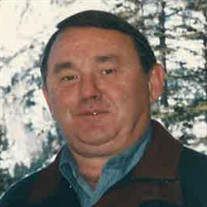 The Only Russy Tractor. Russell Harmer 1948 - 2022 Russ Harmer was born on March 2, 1948, in Spanish Fork, Utah, to Ralph Harmer and Celia Grace Koyle Harmer. He passed away on March 21, 2022, with his Jeannie Beanie by his side. He was preceded in death by both his parents; his oldest sister, Shirlene Lowe; his older brother, Kay Harmer; and his younger brother, Jim Harmer. He is survived by his wife, Jeannie Harmer; his oldest brother, Bliss Harmer; his older sister, Myrna Kamae; many nieces and nephews; and his very close friend and care giver, Barb. Russ met his future wife, Jeannie Steffey Collins, who was working at the Goldminer’s Daughter Lodge in Alta, Utah, in February 1973. Jeannie Beanie was the love of his life. They were true life partners for 48 years. They were married June, 1975, at Alta’s Rustler Lodge. They loved to travel and camp throughout the Intermountain West. They also visited many beautiful places: from Alaska to the tip of South America; Scandinavia, Austria, Switzerland, Germany, Australia, New Zealand, South Africa, Victoria Falls, and Hawaii. Russ grew up in Mapleton, Utah, and worked on the family farm. Working on the farm taught Russ, from an early age, the work ethic and drive he used all his life. He learned about operating and repairing farm equipment, which he did very well. Russ graduated from Springville High School in 1966. His first job after graduation was at Geneva Steel, in the pipe mill division. December 1966, Russ went up to Alta Ski Area and applied for a job operating equipment. He was hired by Chic Morton during his interview and started the next day. Russ went from dirt farming to snow farming. Russ was put in charge of operating and maintaining Alta’s small fleet of three snow cats. The first snow cat didn’t have a cab. Russ sat in the open air except for a zip - up tarp around him. That was the beginning of grooming the slopes; and Russ’ life - long love for Little Cottonwood Canyon, Alta, and its snow. Russ applied his experience from the farm to working with snow cat manufacturers to develop equipment that gave the skiers the best surface. He would fabricate implements to pull behind the snow cat. After he tested them, he would share the ideas with the snow cat manufacturers. Russ helped develop many of the implements used today for grooming the slopes. He was a big part of developing the 12 – way articulating snow cat blade that is used today. With his improvements to snow cats and implements, Russ was able to make the snow a better, safer, product for skiing. Being knowledgeable and doing the job well, was the creed he lived by. Russ worked on construction projects, future planning, improving and expanding the ski area. Russ designed the “Cat House”. This building was constructed for servicing and repairing snow cats, implements, and other equipment. Other resorts were impressed by the lay – out and functionality of this building. Russ shared the building plans with other resorts to help the industry. Russ was the construction project manager of Alta’s mid-mountain Alf’s Restaurant in 1992. Under Russ’ supervision the project, which could have taken nine months; was completed in only six months. In 1990, Russ became the assistant general manager. He remained in this position until he retired from Alta in May of 1999. Upon retiring from Alta Ski Area, Russ had his own construction consulting business. He was the project manager for the construction of the Rustler Lodge chair lift. The biggest job Russ did was as the project manager for the construction of the Joe Quinney Winter Sports Center that contains the Alf Engen Ski Museum at the Olympic Park, in 2000. The building was enclosed and was turned over to the 2002 Olympic Committee. Upon completion of the 2002 Olympics and Para Olympics, the building was returned to the foundation to be completed. The Alf Engen Ski Museum officially opened in the Joe Quinney Winter Sports Center in October 2003. Russ was honored and very proud to have been a part of such a legacy building. The Association of General Contractors of America’s Building Project of the Year award for 2002 was awarded to the Joe Quinney Winter Sports Center with Russ as the planning consultant. In 2009, the Utah Ski Archives and the University of Utah J. Willard Marriot Library presented Russ with the S.J. Quinney award for his contributions to skiing in the Intermountain West. Russ was always up for an adventure; whether it was discovering new places in Utah or around the world. He loved to experience the wildlife, cultures, and historic sights. Russ loved to ski, sail, camp, boat, fly fish, and travel. Ever the farmer, Russ spent many hours in his garden and tending to the roses. Call an old friend; go discover something new; go skiing; drop a fly; take a scenic drive; have a dark and dirty and think of Russ. There will be a celebration of life for Russ on Saturday, May 14th from 1:00 pm – 4:00 pm in the Alf Engen Room at the Alta Peruvian Lodge in Alta, Utah. Please wear a Hawaiian or cheery color shirt in honor of Russ. In lieu of flowers, contributions in Russ’ name can go to: The Alf Engen Ski Museum, P.O. Box 980187, Park City, Utah 84098; or the Great Salt Lake Audubon, P.O. Box 520867, Salt Lake City, Utah 84152 – 0867.

The Only Russy Tractor. Russell Harmer 1948 - 2022 Russ Harmer was born on March 2, 1948, in Spanish Fork, Utah, to Ralph Harmer and Celia Grace Koyle Harmer. He passed away on March 21, 2022, with his Jeannie Beanie by his side. He was preceded... View Obituary & Service Information

The family of Russ L Harmer created this Life Tributes page to make it easy to share your memories.

The Only Russy Tractor.