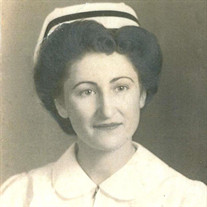 Ruth Trabert Dilts (1921-2021) was born 25 June 1921 in Cheraw, Colorado, the fourth child of five sisters and four brothers. She grew up the daughter of a Mennonite minister-farmer. Ruth told stories about crossing the winter ice on the lake near her home in Cheraw as a short-cut to school. She also knocked around golf balls on the nearby golf course. Ruth remembered the unpleasant chore of being lowered into her family’s water well to scrape alkali off the walls. She was also given the responsibility to raise a sickly "snot-nosed" turkey for her family. Because of the Dust Bowl conditions during the Great Depression her father lost his Colorado farm to the sheriff for unpaid taxes, and the family moved back to her father's original home near Lockridge, Iowa. The Iowa farm bordered on the Skunk River, where she spent part of her hot summer days swimming. Ruth left home about age 13 to work as a domestic servant (maid). She worked her way through college in Iowa, Minnesota, and Berkeley, California during World War II to receive a Bachelor’s and Master’s degree in health to become a registered nurse. One of her specialty areas of study was nutrition. Ruth married Dale B. Dilts, a general-practice lawyer in Berkeley, California, on 10 June 1949. She raised her children, three brothers and one sister, in Albuquerque, New Mexico. She worked as a nurse and in the Health Department until her first son was about three, when she quit to be a full-time mother. Ruth loved travel and was frugal. For years she would save most of the $40 weekly family food budget by only spending $15 for items like pinto beans and powdered milk. The years of accumulated savings allowed her to buy a Volkswagen Camper Van which she used to take her children to places like California, the American South, and the New York World’s Fair on long three-month road trips during summer breaks. She continued saving enough food money to take her children to Hawaii, and buy a new VW Camper in Europe where she and her children visited every free, western-European nation except Finland, Andorra, and San Marino the summer of 1969. Ruth became a private-duty nurse after raising her family, and eventually was appointed by the Governor as Director of the New Mexico Board of Nursing in the early 1970s. As Director, she once had to travel to Farmington, NM to help nurses taken hostage during an American Indian uprising in a hospital there. After leaving that position, Ruth returned to private-duty nursing for wealthy patients. It was after she raised her children that Ruth qualified for a PhD in nursing. Ruth retired from nursing in the 1990s. After she retired, Ruth occasionally enjoyed the company of a Central Methodist Church women’s group for lunch. She was very health conscious, watched her diet, and liked walking over a mile around the park near her Albuquerque home every day for many years. While her husband, Dale, was alive, he and Ruth were both Life-Masters at the Albuquerque Bridge Club where they played bridge most Wednesday nights. They won many duplicate-bridge tournaments and trophies from around the United States. Ruth’s only daughter, Carlene, died in an automobile accident in North Carolina in 1989. Ruth’s retired husband, Dale, died in 1998 in Albuquerque from hospital-pneumonia which he contracted after breaking an arm. In the early 1970s Ruth was in an automobile accident that left her unconscious for several days. That may have contributed to a non-Alzheimer’s dementia she suffered from during the last nine years of her life. Her logic, reasoning, and grateful-cheerful personality remained with her, but parts of her memory, and the ability to identify her relatives slowly declined. The last two years of her life she usually spoke only a few words at a time, but obviously understood what was going on around her. Ruth lived at the Sunrise of Sandy Senior Living Center in Sandy, Utah since 2013. She enjoyed walks (and later wheelchair rides) in the neighborhood outside of her care center. She survived a mild case of Corvid-19 at age 99. About ten weeks after that, Ruth may have experienced a stroke, and passed away in her sleep two days later on 16 March 2021 in Sandy, Utah, just a few months shy of being 100 years old. Ruth is survived by a sister Esther Trabert Smith of Redwood City, California; by a brother Joseph Trabert of Santa Cruz, California; by three sons: David Dilts of Salt Lake City, Utah; Bryan Dilts of Enola, Pennsylvania; Thomas Dilts of Eskilstuna, Sweden; and by 19 grandchildren, and by many great-grandchildren.

Ruth Trabert Dilts (1921-2021) was born 25 June 1921 in Cheraw, Colorado, the fourth child of five sisters and four brothers. She grew up the daughter of a Mennonite minister-farmer. Ruth told stories about crossing the winter ice on the lake... View Obituary & Service Information

The family of Ruth Trabert Dilts created this Life Tributes page to make it easy to share your memories.