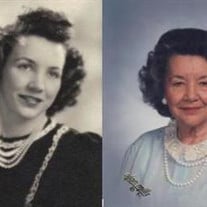 After 91 years of living, loving, laughing and serving others, Ruth Cooper Maughan passed away on November 4 with loved ones by her side. She was born April 20, 1923 to Joseph Parker Cooper and Eleanor Redford Cooper at Mt. Sterling, Utah. She was next to the youngest of eleven children. She was her dad's partner on the farm. She attended schools in Cache Valley and graduated from South Cache High School. Ruth married Douglas Bradshaw Maughan in the Logan Temple on October 12, 1943. The next week they rode the train to Orlando, Florida. She spent the next sixty years there, raising a family and helping the area to grow. She was an active member of the Church of Jesus Christ of Latter-day Saints. She served in many callings especially in Primary and Relief Society. Ruth served as an ordinance worker in the Orlando Temple for five years. She was honored as a "Pioneer" of the Orlando area for fifty years of service. Doug died in December 1977. Ruth married Carl Shutan in July 1983. He passed away in September 2001. Ruth sold her home in 2003 and moved to Utah to spend more time with her children and grandchildren. Ruth was preceded in death by her parents; her husbands; an infant son; a grandson and a granddaughter and a great grandson; her brothers and sisters: Ida, Marvin, Henry, Alta, Heber, Lewis, Luther, Carl and Norma. She is survived by her children: Susan and Ron Turner, Marcia Maughan, Reed and Patti Maughan; and Mike and Pauline Maughan; 16 grandchildren, 23 great grandchildren with two on the way and by her sister, Eleanor Mathews and brother-in-law Dale Maughan. Ruth will be greatly missed by her family and loved ones. Special thanks to Candice Hammer, MarKae Funk and the staff at River Meadows for taking such good care of Ruth. Funeral services will be Wednesday, November 12, 2014 at 10:30 am at the Matterhorn Chapel, 285 N. Matterhorn in Alpine, UT, with a viewing from 9:30 to 10:15 am. Interment and graveside services will be held Wednesday at 3:30pm in the Wellsville City Cemetery.

After 91 years of living, loving, laughing and serving others, Ruth Cooper Maughan passed away on November 4 with loved ones by her side. She was born April 20, 1923 to Joseph Parker Cooper and Eleanor Redford Cooper at Mt. Sterling, Utah.... View Obituary & Service Information

The family of Ruth Cooper Maughan created this Life Tributes page to make it easy to share your memories.

After 91 years of living, loving, laughing and serving others,...