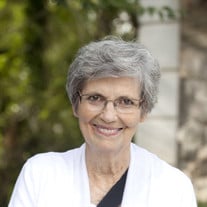 Sally Ruth Tennant Clark 4/21/1943 – 7/17/2019 Sally Ruth Tennant Clark quietly passed away on July 17, 2019 surrounded by family. Sally’s courageous and determined life of 76 years was nothing short of a “miracle.” Born to Ruth and Max Tennant, Sally was the third of 11 children. She grew up in Salt Lake City and graduated from Granite High School in 1961. As a young child, she was adventurous and active. She loved doing things that often compromised her dresses, like climbing trees and playing kickball. Sally contracted scarlet and rheumatic fever in her youth, which was later determined to be the cause of her ailing heart. Sally overcame several heart surgeries in her life and she knew life was temporal. She embarked on a journey to please the Lord as a daughter, wife, mother, and teacher. Sally attended the University of Utah and after a 2-year courtship, married Charles Bushman Clark in the Salt Lake LDS Temple on Nov. 24, 1965. Their marriage blossomed in Farmington, Utah where they raised eight boys and one girl. Sally’s greatest teaching took place in the home where her desire to raise a family unto the Lord was paramount. She was vigilant in organizing morning scripture study, prayer, daily chores and home evenings. She took “no guff” from any adversary. Sally loved music, singing, cooking, canning, baking, cake decorating, calligraphy, gardening, and writing and sharing thank you notes. Sally was patient, persistent, a listener, and loyal to the demands of motherhood. She loved church service and was a faithful member of the Church of Jesus Christ of Latter-day Saints. She celebrated Easter, Halloween and caroling at Christmas. Although heart complications continued, she had a wonderful caretaker in Charles until he unexpectedly passed in 2013. Sally continued on with her independence living by herself, cooking and attending gospel study classes, church and family functions. She became an LVAD patient in 2011 and received heartwarming care from the medical doctors and staff at Intermountain Medical Center Heart Institute. As a family we express our greatest love and appreciation to this remarkable team in prolonging Sally’s quality of life. We love you Mom, and will miss you! Survived by her children: Spencer (Jennifer), Kaysville; Matthew, Kaysville; Richard (Holly), Cedar City; Loren, Kaysville; Nathan (Stephanie), Clinton; Andrew (Megan), Layton; Kimball (Erin), Kaysville; Stuart (Alicia), Clearfield; Sarah Erb (Stevie), Salt Lake City. She has 23 grandchildren and one on the way. Preceded in death by Charles (husband), Tresa Chamberlain (Sister), Joseph & Brent Tennant (Brothers), Ruth & Max Tennant (parents), and Eli Connor Clark, George Kimball Clark & Wade Cole Erb (grandsons). Funeral services: Thurs., Aug. 1 at 11 am in the Orchard Chapel, of the South Bench Ward, 1282 W. 1875 N., Farmington. Viewing: Wed., July 31, 6-8 pm and 9:30-10:45 am at the chapel prior to services. Interment: Farmington City Cemetery. In lieu of flowers, donations accepted at the Sally Clark Memorial Account at America First Credit Union, #911151. Condolences may be shared at: www.premierfuneral.com.

The family of Sally Ruth Tennant Clark created this Life Tributes page to make it easy to share your memories.