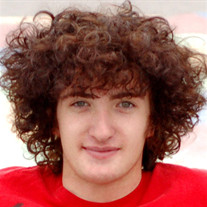 Samuel David Buxton was born in Portland, Oregon on May 16, 1995, arriving a full ten weeks pre-mature and weighing slightly more than 3 pounds. He survived his precarious and abrupt birth and went on to survive a long list of mishaps that includes snowboarding falls, longboarding crashes, traffic near misses, a fall through a ceiling, and even a crash on his bullet bike going 128 mph. He loves playing baseball and played every summer on an assortment of teams since he was four years old. He loves music and the outdoors and the wilderness. He is an Eagle Scout and a lifeguard. He loves to “fly” on his bullet bike, and sail down hills and trails on his longboard, and is gloriously talented on a snowboard, fearlessly flipping and twisting off jumps and ramps on the snow of his beloved mountains. He is brilliant and sharp, and graduated from Utah Valley University with an Associate’s Degree of Science at age 17, a full month before he was awarded his High School Diploma from Utah County Academy of Science. He is a chess champion and can solve a Rubik’s Cube in under a minute. He is fun and funny and witty and clever. He has a heart of gold and is a peace maker. Never contentious, never an argument, never a disparaging word for anything or anyone. He is gentle and kind and full of genuine love and compassion for all creatures. He loves all the animals and all the people, especially his family. He sleeps with his cat and he loves his 4 adorable nephews and his darling little niece, playing with them and loving them and enveloping them in his peaceful and teasing, playful demeanor. More than anything else he loves his sisters and his brother, and is very close to and has a unique and engaging and deep relationship with each of them. He loves the amazing people his siblings married and considered them more siblings, rather than in-laws. He loves his mother and tried to protect her from the harshness of the world, especially after his father died suddenly 2 years ago. He suffered greatly at the loss of his father. He was deceived and promised relief by substances that numbed the pain but caused myriad problems for him. He sought to overcome and took himself to a wilderness therapy program that helped him find himself and reconcile his grief and conquer his demons. He came out of the wilderness after 2 months, not only able to start a fire with nothing more than a string and stick, and navigate by the stars, and climb over towering mountains and through valleys, and find water in the desert, but having established a relationship with The Creator and a strength within himself to navigate life unaltered and thrive. He came out of the desert bright eyed and clear and confident and strong. But only 3 months later, the heinous tentacles of an insidious substance lured him one last time. Having unknowingly lost all tolerance in the months of recovery, the substance that promised pleasure, deceived himand ruthlessly took his life. The world was a better place when he was here and now the hole that is left at his parting is too huge to ever fill. He is loved and adoredand missed in indescribable ways. The loss is overwhelming to those privileged to know and love him. He is survived by his mother, Deanna Buxton; his sister Erin (Adam) Miner and their 3 little ones, Milo (5), Logan (4), Reagan (2); his brother Scott (Charelle) Buxton and their 2 little ones, Kainen (3), Linken (1); his sister Lani (Trevan) Penrod; and by all of his aunts and all of his uncles and all of his cousins and all of his grandparents. He is preceded in death by his father, David Scott Buxton. The only solace we find at his parting this world on March 17, 2016 is there was a grand reunion and he is now with his beloved Dad he missed so much. We love you, Sam, and we miss you with deepest parts of our souls. The world will always be a half an inch off without you here. Services for Sam were held be Saturday, March 26, 2016 at The Nathaniel LDS Chapel. 1222 Nathaniel, Pleasant Grove, UT. Viewing starting at 10 a.m. and Funeral at Noon.

Samuel David Buxton was born in Portland, Oregon on May 16, 1995, arriving a full ten weeks pre-mature and weighing slightly more than 3 pounds. He survived his precarious and abrupt birth and went on to survive a long list of mishaps that includes... View Obituary & Service Information

The family of Samuel "Sam" David Buxton created this Life Tributes page to make it easy to share your memories.