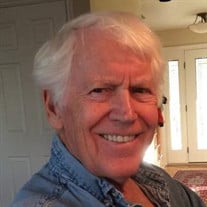 Samuel Leonard Wilkinson born March 24, 1933 to Samuel Verl Wilkinson and Vera Blanche Thompson in Salt Lake City, Utah. He was the oldest of four children Gail Allen, William Roger, Judith Vera all of whom preceded him in death. He left this life September 9, 2018 in Salt Lake City, Utah. The last three weeks of his life was spent at the VA Memory Care Unit. This is a wonderful facility and we would like to thank the nurses and staff for their wonderful care. Sam joined the Navy and fought in the Korean War. This began his love of the ocean and boats. In 1954 he met and married Janken (Jane) Britt Hadel. Theirs was a love story of the ages. Sam and Jane has two daughters, Susen Jane ( Marty ) Zobel and Gretha Anne (Gary) Record. They have seven grandchildren, Tia (Brett) Lalor, Samuel (Christy) Record, Megan (Jeff) Ingledew Larsen, Marin (Kris) Canham, Mallory (Clinton) Record Roberts, Hope (Ken) Stimach, Kira Ingledew. They also have 12 great grandchildren: Hunter, Jaden Wyatt, Markus, Garrett, Mia, India, Eliza, Freya, Brynn, Bridgette, and Thorsten. Sam's family also included his sister-in-law who was truly an additional daughter to him. Sissel (James) Hawkes with their children and grandchildren: Kris (January), Andy (Kanion), River, Rowan, and Koda. Sam loved the mountains and the ocean. All the work he did as an employee at Hill Air Force Base was to allow his family to enjoy life. He saw the promise of Alta, Utah and bought a piece of property there in the 1960s. Eventually building three beautiful homes there. In the winter skiing was a weekly family activity, with wooden skis, cable bindings and thinsulate didn't exist. There were lunches of saltines and sardines as well as yogurt all before those things were cool. Summers found him taking the family sailing on the Great Salt Lake, Bear Lake, and many lakes in Montana and Minnesota and Canada. He eventually discovered the Puget Sound and then summers were spent on their yacht Sjoen. Family and friends were always invited to spend time with them on their yacht. His family was the most important thing in his life and he was always willing to do anything that his family needed. He was our mover, fixer and the one to confess your mistakes to. Even in his illness he was concerned that we didn't have what we needed. Even going so far as to call family that he could no longer recognize freeloader because he wanted to protect his wife from being taken advantage of. Those that knew him were privileged to know an amazing man. A celebration of Sam’s life will be held on October 13, 2018 at his home from 2:00 to 5:00p.m. In lieu of flowers, celebrate life as Sam did, love your family and give them a kiss. His family was everything to him.

The family of Samuel Leonard Wilkinson created this Life Tributes page to make it easy to share your memories.