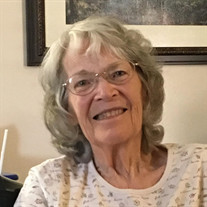 Sandra Bringhurst Boyce, 84, passed away peacefully of heart failure on October 22, 2018, in Murray, Utah. Sandra was born on June 1, 1934 in Toquerville, Utah, the fourth child of Samuel Bringhurst and Erma Stout. Sandra was preceded in death by her parents, her sister Marilyn Clark, and her brother Deon Bringhurst. She is survived by her husband of 65 years, David H. Boyce; her sisters Lorna (Lee) Cox, and Karen Stratton; and her children, Brooke duMont of Lancaster, CA; David B. (Carma) Boyce of Kearns, UT; Wayne (Nancy) Boyce of Camarillo, CA; Suzan (Todd) Meredith of Ashburn, VA; Lynette (Don) Leatham of Chandler, AZ; Gordon (Melinda) Boyce of Hagerstown, MD; and Earl (Shelly) Boyce of South Jordan, UT; as well as her 32 grandchildren and 23 great grandchildren. Sandra graduated from Hurricane High School in 1952. After graduation she attended Brigham Young University where she met David. They were married August 28, 1953 in the Saint George LDS Temple. David and Sandra started a family while David served in the U.S. Air Force. They were stationed in Utah, Texas and Arizona. After David left the Air Force, their growing family lived in Arizona, Washington, Michigan and Utah. As a couple David and Sandra lived in Maryland for many years and regretted to leave many friends behind when they made a final move back to Utah for their retirement years. Each time the family moved, Sandra worked tirelessly to make each house a home full of love and happy times. She raised her children to respect and love each other and to hold family in the highest regard. She took pride in her children’s ability to carry on traditions and manage the necessities of life. Sandra loved her family and served them with all her heart. One son commented, “Even though she never had much, she made what we had seem like enough!” Sandra was an accomplished seamstress, cook and homemaker. She won awards for her dress making as a teen, and Sandra spent much of her time making special clothes for her children and grandchildren. Her homemaking skills were numerous. Homemade bread, cookies and granola were always available in her home! As a life-long member of The Church of Jesus Christ of Latter-day Saints, Sandra served in multiple leadership callings. She loved serving in Primary as well as the Relief Society. She was able to stay home as a full-time mother until her youngest child was in high school. After raising her children, she became an in-home nursing aide for the elderly in Salt Lake City. She found joy and fulfillment in this service. She enjoyed the association of those she cared for as much as they benefited from her assistance. A combined memorial service for Sandra and David will be held at a future date.

Sandra Bringhurst Boyce, 84, passed away peacefully of heart failure on October 22, 2018, in Murray, Utah. Sandra was born on June 1, 1934 in Toquerville, Utah, the fourth child of Samuel Bringhurst and Erma Stout. Sandra was preceded in... View Obituary & Service Information

The family of Sandra Bringhurst Boyce created this Life Tributes page to make it easy to share your memories.