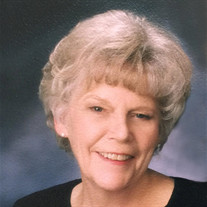 Sara Lou Shuldberg Blomquist Sara Lou Shuldberg Blomquist, passed away peacefully April 17, 2019, at her home in Salt Lake City, Utah. She was surrounded by her family and friends. Sara Lou was born to William Anderson and Sarah Jane Hansen Shuldberg on February 6, 1929 in Preston, Idaho. She married her sweetheart, Philip Reed Blomquist, on January 29, 1953, in the Logan LDS Temple. Sara Lou was a wonderful wife, mother, grandmother, great-grandmother, neighbor and friend to all who knew her. Sara Lou served an LDS mission in Sweden, and actively served in her church community and congregation. Sara Lou was the epitome of charity and her beautiful spirit showed through in everything she did and was. She is beloved by her family and many friends and will be greatly missed. She is survived by her husband, Philip, her children, Phyllis Wallin (Hans), Lou Ann Crowther (Jay), Philip (Debbie), Paul (Jana), Barbara Tanner (Mark), Linda Worthington (Ed), and Sue Nelson (Joel); 26 grandchildren; and 48 great-grandchildren. She was preceded in death by her parents, brothers, and sisters. A viewing will be held Friday evening April 19, 2019 from 6:00 – 8:00 at Brookshire Ward, 3487 S 1300 E, SLC. Funeral services will be held at the same location on Saturday April 20, 2019 at 11:00 AM with a viewing preceding from 9:30 – 10:45. Interment will follow at Elysian Burial Gardens, 1075 E 4580 S, SLC.

The family of Sara Lou Blomquist created this Life Tributes page to make it easy to share your memories.