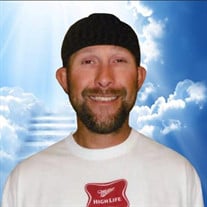 Scott "Bizzo" W. Clark On the afternoon of January 5, 2016, Scott passed away surrounded by family at Timpanogos Hospital in Orem, Utah after a two week battle with diabetic complications and Pneumonia. Scott was 36 years old. Scott was born July 24, 1979 in Provo, Utah To Marilyn "Mert" Clark. He was born and raised in Utah county, by his mother, where he lived until his death. Scott worked in concrete doing footings and foundations for homes with A&D Quality Construction. No one who met Scott forgot his infectious smile or laughter. He absolutely loved playing pool, darts, and singing karaoke. He could always be found playing in tournaments at The Hitching Post. Scott was a die-hard Dallas Cowboys fan and could be found watching games every week of football season. He loved spending time with his son most of all. They could always be found playing video games, laughing, joking and teasing each other. His son was the light of his life and he loved the moments he shared with him. Scott also shared the last years of his life with Dena, her children, and her grandchildren whom he loved and adored. He unconditionally loved all of the people in his life. With the people he loved he felt truly happy and alive. He was always there for others to raise the spirits of those around him with his infectious smile, laughter, and perpetually sunny attitude. His light and memory will live on through all of the lives he touched and people he enriched during his time on earth. Scott is survived by Dena Thomas of Orem, his son Bailey Thompson of Payson, Bailey's mother Amanda Thompson, his uncles Sheffer Clark (Yvette), John Clark, Kendall Clark, cousins, friends and family too numerous to list but not forgotten. He was preceded in death by his mother Marilyn "Mert" Clark, his grandfather Hoover Winfield Clark, and his Grandmother Euzell Tietjen Clark. Friends may greet Scott's family 11:00 a.m., Saturday, January 16, 2016 at the LDS church located at 1650 S 200 E Orem, UT. In Lieu of flowers friends and family have been asking about donations, here is a website we set up https://pages.giveforward.com/remembrance/page-jwcyj72/

Scott "Bizzo" W. Clark On the afternoon of January 5, 2016, Scott passed away surrounded by family at Timpanogos Hospital in Orem, Utah after a two week battle with diabetic complications and Pneumonia. Scott was 36 years old. Scott was... View Obituary & Service Information

The family of Scott Winfield Clark created this Life Tributes page to make it easy to share your memories.