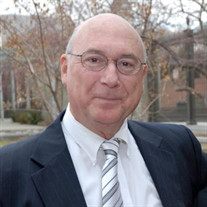 Scott Vance Mower December 5, 1944 – March 31, 2022 Scott Vance Mower was born on December 5, 1944 in Fairview, Utah. The fifth of ten children of Velma LaRue Vance and Cleston Max Mower, he was his Dad’s little shadow, “Pete” and “re-Pete”, working on the family dairy farm. However, his mother did fire him as her tree pruner because he always trimmed her forsythia to the point it never bloomed. The family moved to Bountiful, Utah just before his father’s death when he was 10 years old. He then became the family protector, grew closer to his siblings through helping raise them and the work ethic he already had increased exponentially. He graduated from Bountiful High School where he met and fell in love with Kathleen Stevenson. He was Kathy’s knight in shining armor, saving her from a tumultuous household by marrying young on August 7, 1964 at her parent’s home in Woods Cross, Utah. They were later sealed for time and all eternity in the Salt Lake LDS temple on March 18, 1970 with two of their three children. Scott attended Salt Lake Trade Tech (now SLCC), studying automotive mechanics. Talented in many trades including mechanics, cabinetry and wood working he was able to take care of his little family and share his skills with all those around him. Scott worked in many fields; mechanics, automotive sales rep, factory and sales rep, and owner of an antique shop. From this expertise he continually served those in his community by helping re-roof neighbor’s houses, teach others to fix their cars, mentoring many, building and remodeling many homes and furnishings. Being a very devoted man, Scott’s greatest accomplishments came from being a loving husband, a dedicated dad, an amazing grandfather and fun great-grandfather. He served in many leadership roles, including Bishop, for The Church of Jesus Christ of Latter-day Saints, where he truly was a great example of how to be a disciple of Christ. He faithfully worked on his family history and served two service missions, both with the Family History Center. One of Scott’s greatest abilities was making people happy with his great sense of humor and giving everyone (even animals) nicknames. His Great-Grandkids were known as Morty, Oakie-Pinocchi, Chuck, Camerdon, Da-wee, Da-woo, and more. And receiving a nickname from him was a great privilege and act of love! His laugh was infectious and enjoyed by many! When his children were younger and didn’t appreciate his laugh, they would sit apart from him and Kathy at movies so people wouldn’t know they belonged to him. Later in life, they finally realized what an amazing thing it was. Watching Home Alone 2 quickly became a Christmas tradition when his infectious laughter began minutes BEFORE anything funny even happened. You would know he thought something was hilarious if tears were streaming down his face and he couldn’t catch his breath. These cherished moments won’t be the same without that belly chuckle. In 2001, Scott was diagnosed with Amyloidosis. A very rare bone marrow disease, he had 6 months to live. The community showed their love by helping pay for a stem cell rescue in Boston, Massachusetts, which increased his odds to live 6-8 years. Fearing he wouldn’t live long enough to see his first grandchild fulfill a mission for The Church of Jesus Christ of Latter-Day Saints, he out-lived the prognosis and witnessed two missions, the marriages of 5 grandchildren, as well as the birth of twelve great-grandchildren. The last 20 years of Scott’s life, he settled on being a part-time napper and full-time Grandpa. Fueled by Chocolate and Coca-Cola, he worked non-stop with his hands. He enjoyed gardening, building on the family’s cabin property, riding around on his four-wheeler and scooter and teasing his grandkids. He loved the retirement life with his true love while he enjoyed some of his favorite hobbies; photography, hunting, wood carving, fishing and overfeeding his dogs. In 2021, he was diagnosed with a second, rare bone-marrow disease; Myelodysplastic Syndrome (MDS). He was successfully beating this disease with chemotherapy, when he got an enormous blood clot in his leg, which then led to a massive pulmonary embolism, causing irreversible damage to other parts of his body. It was then he decided to come home on hospice. Scott passed away peacefully on March 31, 2022 at home, holding his sweetheart’s hand. He was pulled into Heaven, arm in arm with his two grandsons that preceded him in death, McKallister Vance Hinckley and Quincy Michael Hinckley. He was also preceded in death by his sisters; Joan Mower, Pat (Richard) Rawlins, as well as his brothers; Kirk Mower, Richard King (Ben) Mower and Kerry Mower greeted him with hugs and surely had the best water fight ever! He is survived by his wife of almost 58 years, 3 children; Natalie (Mike) Maughan, Shaun (Suzee) Mower and Pamela Mower, 7 grandchildren; his property sidekicks Colby “Buddha” (Kierra) Maughan, Caden “Diddles” (Huntlie) Mower, and Alex “Big Al” Maughan, and the prettiest granddaughters he’s ever seen; Cali “Louie” (Josh) Hinckley, Taylor “Squidjit” (Brandon) Mower, Abbie “AbbieSarah” (Cameron) Dougherty, and Berklee “Berkalee” Mower. Along with 10 great-grandchildren; Morgan Maughan, Oakland Hinckley, Ashlyn Maughan, Charli Mower, Camden Hinckley, Dani Mower, Jessie Maughan, Murphy Hinckley, Bennett Mower and Russell Maughan. And 4 remaining siblings; Sharon Kimber, Marlene (Merlyn) Powell, Clark (Sandy) Mower, Janean (Larry) Blake. Funeral services will be held Saturday, April 9th, 11:00 am at the Mount Jordan 6th Ward, 9331 South 300 East, Sandy, with a viewing Friday evening from 6 - 8 pm at the church and from 9:30 - 10:45 am prior to services on Saturday. Interment, Larkin Sunset Gardens, Sandy. View the funeral services at http://mywebcast.churchofjesuschrist.org/sandyutahmountjordanstake

The family of Scott Vance Mower created this Life Tributes page to make it easy to share your memories.