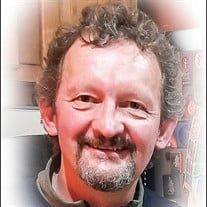 Scott Lee Olsen was born February 9, 1959 in Salt Lake City to Gay Quayle and Ronald Olsen, one of four children: Jeff, Jane, Scott, and Chris. Scott left us on the evening of July 4th celebrating his own independence and freedom from the pain and suffering of fighting cancer. Scott was six years old when he learned about the speed of light and the internal combustion engine from his older brother Jeff. Scott was THAT kid who took apart all his Christmas presents. It was inevitable that as an adult Scott volunteered as a judge for Junior and Senior High School Science Fairs, and enjoyed teaching science to youngsters, and, well, everybody. Scott attended Murray High School and participated in the electronics club. He graduated from the University of Utah in 1983 with a Bachelor of Science in Physics with an emphasis in Electrical Engineering. Early in Scott’s professional career he worked on the Tomahawk Cruise Missile Weapons System while under contract with General Dynamics. He then took a job with Ceramatec in 1987 as an Engineering Testing Manager where he was integral in the development of high-energy-density sodium-sulfur rechargeable propulsion batteries. At Ceramatec, Scott met his future wife Corinna Weir who was working as a lab tech. They were married in 1996 and proceeded to have 2 cats named Hondoo and DuBinki, replaced just now after 30 years by Smudge and Sakura. Scott started Olsen Advanced Electronics in the mid-90’s as a platform to design and manufacture altimeters and ignition timers for the model and high-powered rocketry hobby. He designed innumerable devices, including the LBB, a one-wire turn signal device, a multiple-stepper-selector machine for catheters, a reverse-osmosis exhaustion detector, and a sidereal drive for an equatorial mount telescope. Scott also built a few very special vacuum tube audio amplifiers in custom wood boxes that produce a rich, full sound – especially when vinyl is pumped through to a set of Klipsch speakers and cranked to 11. Scott and Cory were very fortunate to have hobbies and jobs that overlapped. The basement of their home included space for Scott’s laboratory and Cory’s studio. They enjoyed working together on separate projects. Scott's most recent job was with PostNova Analytics as an engineer responsible for system installation of particle separation machines for pharmaceutical and research laboratories. Here he also programmed a sedimentation asymmetric flow simulator. Scott grew heirloom tomatoes in a self-designed aquaponic greenhouse, which is a growing system that combines aquaculture (raising animals: fish and two saved-from-the-pot crawdads) with hydroponics (cultivating plants in water). Scott and Cory took many epic adventure trips with family and friends. In addition to enjoying these activities in Utah, they went paragliding in Turkey, scuba-diving and river-rafting in Australia, sailing in the Caribbean, and backpacking on the Chilkoot Trail in Alaska. Scott really loved jeeping, camping, and river trips with the Pathetic Dudes – a group of close pals, many dating back decades. His clever wit will be greatly missed and he’ll be toasted with desert gin and tonic on every trip! Scott died from non-smoking-caused neck cancer that eventually spread to his lungs, liver, and pancreas. He endured multiple treatments over four years. Scott was weary of dealing with his cancer, stating recently in a dry reflective tone that he was, “ready to get off this train.” He was always aware of the toll it was also taking on his loved ones. We rest assured that Julie welcomed Scott with open arms. To our many colleagues and so very, very many friends we would like to express our appreciation for your love and support… Thank You. Due to the current pandemic there will be no funeral or memorial service planned at this time. Ongoing wake, let us celebrate the wonderful life Scott lived!

Scott Lee Olsen was born February 9, 1959 in Salt Lake City to Gay Quayle and Ronald Olsen, one of four children: Jeff, Jane, Scott, and Chris. Scott left us on the evening of July 4th celebrating his own independence and freedom from the pain... View Obituary & Service Information

The family of Scott Lee Olsen created this Life Tributes page to make it easy to share your memories.