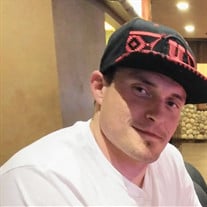 Our beloved son, brother, father, husband Shane Scott Edgar passed away on June 8, 2018. He was only 29 years old. He was born in West Valley City, Utah on August 22, 1988 to Cindy and David James “Jim” Edgar. He is survived by his wife Taylor Erin Lee, their daughter Cadence Lee Edgar, step daughter Chloe Lee Mazanec, mother Cindy Louise Monty, step father Ray Sorenson, sister Janalee Sorenson, nephew Jace Hernandez, uncle John Edgar, aunt Liz Edgar, and many cousins including Kellie Sunde and Sage Marcotte. He and his wife had their beautiful baby girl, Cadence, on May 23, 2018. The time he was able to spend with his family was the highlight of his life. Nothing made him happier and prouder than being a father. His favorite activities included spending time with family, music, cars and the outdoors. Wendover trips were something he looked forward to because he usually won. “Fast and full throttle” was his motto, and he could fix anything with a motor or build anything that had to do with the house. Shane was a kind and loving free spirit and forgiveness came very easily to him. He loved and cared for his wife and children with his whole heart (which is enormous). Shane was welcomed into Heaven by his two best friends; his father, David James “Jim” Edgar, and childhood dog, Sam, as well as his grandparents, Nathan and Darlene Edgar, his grandmother Beverly Griggs, and his uncle Scott Edgar whom he was named after. A Celebration of Life will be held in Shane’s honor on Sunday, July 1st at Lone Peak Indoor Pavilion, 10140 South 700 East at 7:00 pm. There will be food served. Memorial donations may be made at https://www.gofundme.com/5od2894

The family of Shane Scott Edgar created this Life Tributes page to make it easy to share your memories.