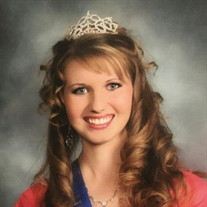 Shannon passed away on October 6, 2018, after battling Multiple Sclerosis for over a decade. She was a wife, a mother of two boys and a devoted member of the Church of Jesus Christ of Latter-day Saints. Shannon was born on November 18, 1988, in Rome, Georgia, to Mark and Dianna Elliott. She came to Utah when she was two years old and grew up in Layton. She attended Whitesides Elementary, Central Davis Junior High School and Layton High School. She was named Homecoming Queen as a senior during the 2006-07 school year. Shannon met her husband, Ryan Comer, while they were both attending Brigham Young University in Provo, Utah, in the fall of 2008. They were married in the Salt Lake City Temple on May 8, 2009. Multiple Sclerosis caused a host of challenges, both physically and cognitively, for Shannon throughout her marriage, but she nevertheless persevered, giving birth to two sons. She had Zachary in November 2014 and then Cyrus in March 2016. Shannon was talented at hula dancing, singing, acting and playing the piano. She loved tropical climates and cats. She had a bright spirit that brought joy to everyone she was around. She was compassionate and demonstrated on countless occasions that the happiness of others was as important, if not more, than her own. She had a tremendous ability to live in the moment. She was happy with her life as it was, despite the challenges she faced. She loved her Heavenly Father and yearned for the day that she could return to him. There is no doubt in the minds of those who know her best that she is filled with joy to be released from the body that tormented her for so long and able to provide help wherever she is needed from the other side of the veil. She is survived by her husband, Ryan; grandparents: J. Morris and Beverly Law; parents: Dianna and Mark Elliott; siblings: Hayley (Ohara), Sterling, Naomi (Fife); children: Zachary and Cyrus; and a number of nieces and nephews. A viewing will be held from 7 to 9 p.m. at the Layton Park Ward Building of the Church of Jesus Christ of Latter-day Saints, 789 E. Wasatch Drive, Layton, UT 84041 on Tuesday, October 9, 2018. An additional viewing will be held the following morning from 9-10:30 a.m. with a funeral service starting at 11 a.m. at the ward building.

Shannon passed away on October 6, 2018, after battling Multiple Sclerosis for over a decade. She was a wife, a mother of two boys and a devoted member of the Church of Jesus Christ of Latter-day Saints. Shannon was born on November 18, 1988,... View Obituary & Service Information

The family of Shannon Sierra Elliott Comer created this Life Tributes page to make it easy to share your memories.

Shannon passed away on October 6, 2018, after battling Multiple...