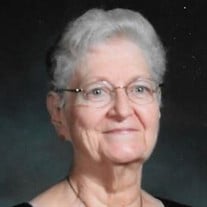 Sharon Hansen Henderson returned to the loving arms of her Heavenly Father in the early morning hours on December 28, 2019. Sharon was born February 23, 1936 in Ogden, Utah. As the only daughter of Benjamin Howard and Alice Irene Hansen, she was raised in West Weber and South Ogden. However, during various stages of her life, she also called Houston, Texas; Roy; Ogden; and Farr West home. Sharon graduated from Weber High School in 1953 and Weber State College in 1962 with a degree in Nursing. She met James E. Henderson while he was stationed at Defense Depot Ogden during the Korean War. He was her tall, dark, handsome Texan, and was the love of her life. They married on June 3, 1953 in South Ogden, Utah. Their marriage was later solemnized in the Logan LDS Temple, February 21, 1963. Together they enjoyed 54 wonderful years until his death in 2010. Mom and Dad enjoyed many vacations traveling the countryside in their truck and camping trailer. Dad was the sturdy driver and Mom was the master navigator. Many wonderful family memories were made along the roads to Texas, Colorado, and numerous other states. Sharon worked as a Registered Nurse for 32 years, retiring in 1995. Her love for nursing was a passion she passed along to both her daughter, Julie and to her granddaughter, Kylee who followed in her footsteps. As a faithful member of the Church of Jesus Christ of Latter Day Saints, she enjoyed many callings throughout her life and found special meaning in each one. Her love for her Savior Jesus Christ and for His atoning grace was unwavering. Sharon was also a proud member of the Daughters of Utah Pioneers organization. Mom always found happiness, laughter, and contentment in her life. Her greatest joy was her three children and their families. She had the honor of being the mother to her special needs son, Ryan. She felt God had given her one of His best when He gave her Ryan. She had a love for all animals, especially her dog and constant companion Chloe. She is survived by her beloved brother Glen (Martha) Hansen of Provo, and her children: Michael (Karla) Henderson of Ogden; Julie (Shadd) Ragan of Roy & Sugar Land, Texas; Ryan Henderson of Roy, 7 grandchildren, 9 great grandchildren, and 2 more on the way. Funeral services will be held at the Farr West LDS Westwood Ward building, 2123 N. 2000 W., Farr West on Saturday, January 4th at 12 pm with a viewing from 10:45am to 11:45am. A special thank you to Dr. Steven Wynn and his staff for their many, many years of devoted care and kindness. Also, to the staff of Bristol Hospice, especially Rachel, Lola, Michelle, and Connie for their love and compassion, and to Sarah England for being such a special angel in Mom’s last days.

Sharon Hansen Henderson returned to the loving arms of her Heavenly Father in the early morning hours on December 28, 2019. Sharon was born February 23, 1936 in Ogden, Utah. As the only daughter of Benjamin Howard and Alice Irene Hansen, she... View Obituary & Service Information

The family of Sharon Hansen Henderson created this Life Tributes page to make it easy to share your memories.

Sharon Hansen Henderson returned to the loving arms of her Heavenly...