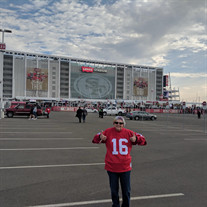 Sharon Wells left this world on February 12th at 4:26am, which can only be regarded as her way of saying she didn’t want to watch another Superbowl which had two teams that she could care less about. Born on August 14th 1948, in Salt Lake City, where she lived all of her life. She was the most kind, selfless and oftentimes...stubborn person you could ever know. While she lived a modest life, she was always willing to help out in whatever way she could and was always that “one phone call to make” if you catch my drift. Her time spent enjoying her life, was often filled with trips to Vegas with her best friend Cindy. While there, they would cause all kinds of havoc on the strip and often end up breaking a thing or two while laughing the whole time as they enjoyed the experience. But, keep in mind, she was not much of a gambler. Her motto was, “20 bucks, win or lose I’m done”. Instead, she preferred to enjoy the time with a strawberry daiquiri in her hand. When not off reeking havoc in the state of Nevada, she loved to spend time in her West Jordan home where she lived with her daughter Tiffany. The two of them made sure to make everyday count, spending them together, doing just about everything. Whether that was going out to enjoy a bite to eat, doing their shopping, making her backyard the perfect place to have a family BBQ, or just laying in bed watching movies. Often times, even jetting off to Disneyland in California or one time to Disney World in Florida. (Although Sharon would tell you it was too damn humid in Florida). Sometimes she would even just decide that her and her grandson Sebastian were going to mesquite for a night to play around in the arcades and not tell Tiff until they were already there. She would always make sure to take anyone she could on a new adventure to make lasting memories. As an avid 49ers fan, she could always be found on Sundays in front of the TV watching football and cheering..or sometimes swearing.. at the game and always with her 49ers blanket and sweater, to make sure everyone knew who she was rooting for. She had the opportunity to fulfill a lifelong dream of seeing the 49ers play in Levi Stadium, beating the Broncos, with her grandson, Bryce. While he was not as thrilled at the outcome, as a Broncos fan, he would still tell you, “it doesn’t matter I’m just happy I got to see the game with Grandma”. On days when she wanted to get out and about, she would call up her daughter Kim to take a day trip to run errands or just get a coke and enjoy each other's company. Oftentimes, this resulted in them getting lost along the way. But, Sharon would always say, “that’s the fun part since we’re having the adventure together and finding our way”. One such adventure took place in Idaho, after a day visiting with her life long friend, Bonnie. While on their way back, and in need of fuel, they found themselves at a most peculiar Chevron, complete with it’s own llama petting zoo and a sign stating the fuel would cost you a literal arm and a leg. Those types of days where you would laugh till it hurt are the days Sharon would say you tuck away for later. Then on any of your bad days you can recall on those memories to bring you back to that happiness. She always had a way of knowing when you, yourself, had a bad day and was very good at convincing you over the phone to come pick her up to go get a fountain coke and just have a conversation with you, making all of the worries disappear. It was almost magical how being around her would make everything better. She is Survived by her Daughters Kim (Lee) and Tiff. Her son Brian (Alexis), and her grandchildren Bryce, Megan (Matt), Ethan, Jude, Holland and Sebastian. As well as her Sister Shirley and brother Kevin along with with many nieces, nephews, grand nieces and grand nephews. Also, as she would say, “her grand-dogs” Walle, Maggie, Bentley, Lilly and Coupe. She is preceded in death by her Son Jay, her parents Dwain and Ruby, Brothers David, Ray and Dwain and also her brother in law Gary. But, with all of this said. While she may not be with us anymore, she knows she raised us all right and that we, “better make damn sure to enjoy life because she did”. I’ll tell you what she told us in the last few days she was here. “Don’t be sad, I’ve lived a really good life with all of you guys”. Make sure that you enjoy life and live it to the fullest as she did. There will not be a memorial service or funeral, because let’s be honest, if you knew her, she would beat your a** if you suggested having one. Instead, make sure to have yourself a strawberry daiquiri while you root for the 49ers.

Sharon Wells left this world on February 12th at 4:26am, which can only be regarded as her way of saying she didn&#8217;t want to watch another Superbowl which had two teams that she could care less about. Born on August 14th 1948, in Salt Lake... View Obituary & Service Information

The family of Sharon Wells created this Life Tributes page to make it easy to share your memories.