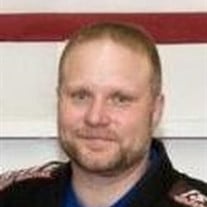 Shawn Blair Weaver, aka “Professor of the Gentle Arts”, passed away May 16, 2015 in his home in West Valley City, Utah. Shawn was born August 13, 1967 in Socorro, New Mexico to Deloy and Karen Hancock Weaver. He was the 2nd child in a family of 6. He graduated from Bingham High School and later attended SLCC where he studied law enforcement and received of certificate of completion. In 1986 Shawn served a L.D.S. Mission to Hartford, Connecticut. Shawn had a gentle spirit and a big heart. There was always fun and laughter when he was with his family and a greeting with wrist lock or arm bar to say hello. He would always go out of his way to help someone in need no matter the request nor the circumstances or whether it was convenient or not. He was especially vigilant in watching over the older widowed women in his neighborhood. Shawn loved animals, especially dogs, and "Gracie" was his favorite companion and a great fishing buddy. He also enjoyed the great outdoors, camping, fly fishing, shooting guns, and reading, but his real passion was the martial arts of Brazilian Jiu-Jitsu. Shawn was the first person in Utah awarded the rank of Black Belt in Gracie Jiu-Jitsu from Master Pedro Sauer. This put him among the elite of the first wave of Americans to receive this honor. He also enjoyed competing in the sport and was a tough competitor winning a silver medal in the black belt division of the 2003 Pan Am games in Santa Barbara, CA. In 2012, Shawn was awarded Third Degree Black Belt “Professor” status from the PSBJJ Academy. Shawn was part owner and beloved instructor at Unified Jiu-Jitsu in South Jordan, Utah. He was a great teacher who demanded a strong emphasis on self-defense and was always very patient and focused on the details. Shawn worked for the Boeing Aircraft Company for 19 years as an Aircraft Structural Mechanic, and has made many work friends over the years there. Shawn was very much loved and will greatly be missed by his students, peers, and especially his family. Shawn is preceded in death by his companion, Susan Rasmussen. Shawn is survived in death by his parents; Deloy and Karen Weaver, Siblings; Lance Weaver, Holley (Stewart) Smith, Quinn (Kris) Weaver, Kim Teerlink, and Katrina (Jeff) Milne, and 16 Nieces and Nephews. A celebration of his life will be at the LDS Church on 12681 S. 3600 W. Riverton from 9:30 - 11:00 A.M. Friday May 29th, 2015 In the Relief Society Room followed by a graveside service at Memorial Estates on 6500 S. Redwood Rd At 12:00 P.M., Valor Gardens on the south west side of the cemetery. Please come share with friends and family how Shawn has touched your life. In lieu of flowers donations can be made to Shawn’s Memorial Fund: http://www.youcaring.com/memorial-fundraiser/shawn-weaver-memorial-fund/356546 or at any Mountain America Credit Union for Shawn Weaver’s Memorial Fund.

The family of Shawn Blair Weaver created this Life Tributes page to make it easy to share your memories.

Shawn Blair Weaver, aka “Professor of the Gentle Arts”, passed...