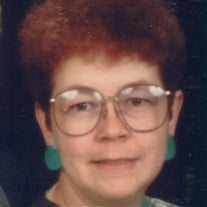 Sheila Frances Mitchell Carter June 30, 1941 – March 25, 2018 Sheila Frances Mitchell Carter 76 of Pleasant Grove, Utah, passed away Sunday, March 25, 2018, at home with her family after a short but valiant fight with cancer. Sheila was born June 30, 1941, in Pocatello, Idaho, to Harry Mitchell and Hazel Frances Bloxham Mitchell. She spent her younger years in Idaho and Oregon before moving with her family to Utah. Prior to 4th grade, her family moved to Pleasant Grove, Utah, where she attended school at Central Elementary, Pleasant Grove Jr. High and Pleasant Grove High School. She graduated from Pleasant Grove High School in 1959. Later in life she attended the Bryman School and graduated in November 1982. In 1958, while he was home on leave from the army, Sheila met her soul mate and eternal sweetheart Lyman Jerry Carter. They were married on June 17, 1959, in the Salt Lake Temple. They enjoyed almost 53 years of marriage before his passing on February 3, 2012. Sheila spent most of her time as a wife, mother and homemaker which she thoroughly and completely loved and excelled at. As the children grew she did work outside the home for a time at the Bookmobile office in Grantsville, Utah, at Standard Optical in Salt Lake and Provo, Utah, and managed a motel in St. George, Utah. She also sold Tupperware, Beeline Clothing, Avon and others. She was very good at sales and enjoyed it very much. Sheila was a member of The Church of Jesus Christ of Latter Day Saints with a firm testimony and belief in the gospel. She held various positions including in the Stake Young Womens; Relief Society President and Secretary; Primary President; Scouting and teaching in the Primary, Sunday School, Young Womens and Relief Society; and being a Visiting Teacher. She was also a member of the Daughters of Utah Pioneers (DUP) and served in many positions over the years. She is survived by three children Jeri Gay, Bruce and Ryan; two grand-daughters Capri and Kinlyn; and one sister Nadine Radmall. She was preceded in death by her husband Jerry Carter, a baby daughter Robyn Su, a grandson Cortlin Carter and her Mother and Father. Funeral Services will be held 11:00 a.m., Saturday, April 7, 2018, at the Pleasant Grove 9th Ward Chapel, 455 East 200 South, Pleasant Grove, UT where a viewing will be held Friday from 6:00 to 8:00 p.m. and Saturday prior to services from 9:30 to 10:45 a.m. Burial will be at the East Lawn Memorial Hills, Provo, Utah. The family wishes to express their deep appreciation to Encompass Hospice and especially Nancy and Kristy for their compassion and service to their Mother, Sister and Grandmother.

The family of Sheila Frances Mitchell Carter created this Life Tributes page to make it easy to share your memories.