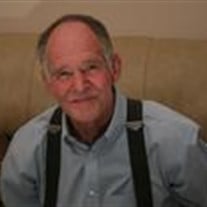 Sherald Andreasen, 74 passed away March 15, 2013, with his family by his side, after a battle with cancer. He was born October 1, 1938 in his parent’s home in Elwood, Utah. He was the son of Norman Andreasen and Orba Davis Andreasen Nalder. He grew up in Brigham City, graduated from Box Elder High School and attended Weber State College. On September 8, 1964, he married Barbara Joyce Wilson in the SLC temple. He was blessed with four children, SharLinn Webb, Tyler Scott (Roxanne) Andreasen, Ryan Michael (Lori) Andreasen and Emilee(Casey) Roche. He is also survived by two brothers, Duard (Charlotte) Andreasen, Norwin(Sheryl) Andreasen and two sisters, Myrlene (Sid) Norman, and Trudy (Rick) Freeman. Also surviving are nine grandchildren. He was preceded in death by his parents, two brothers and one sister. Sherald loved trains, airplanes and telling anyone that would listen about our Nations Space Program. He also loved to take all the kids camping and hunt for beautiful rocks and gems. He was a man that could fix anything, even if it had to be with wire and duct tape. Before he became ill, he loved to work in the yard, he could grow the most beautiful flowers, and he supplied everyone on the block with raspberries growing all over his yard. As a young man, he played drums in a dance band with his brother Duard. He worked at Boeing Aircraft and as a drafter for Thiokol. After the space program ended, his next dream was to drive an 18 wheeler. He finished his working career driving long haul around the United States. He was a member of the Utah National Guard. Our sweet and gentle grandpa will be missed. Funeral services will be held Wednesday March 20, 2013 at 12:00 at the Rock Cliff 1st Ward 1000 Suncrest Dr, Ogden Utah. The family will meet with friends from 10:30 to 11:45 on Wed at the church prior to the services. Interment will follow the services at the Bear River City Cemetery.

Sherald Andreasen, 74 passed away March 15, 2013, with his family by his side, after a battle with cancer. He was born October 1, 1938 in his parent&#8217;s home in Elwood, Utah. He was the son of Norman Andreasen and Orba Davis Andreasen... View Obituary & Service Information

The family of Sherald Andreasen created this Life Tributes page to make it easy to share your memories.