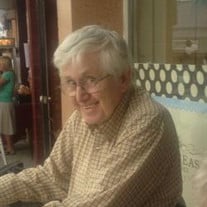 Sheridan Lynn Daines loving Brother, Father, Grand & Great Grandfather (Bumps), died June 13, 2014 in Saratoga Springs, Utah. He was born June 15, 1938 the 3rd son to Raymond King & Evelyn Eliza (Lowe) Daines in Salt Lake City, Utah. The fact that he never graduated from High School did not affect his ability to complete his pre-med studies at University of Utah & going on to graduate Medical School at George Washington University. He was an amazing physician & most patients referred to him as "Doc" or "Professor". He was gifted in many ways artistically ranging from carving, bronze work, honky-tonk piano, but most treasured to his children, grand & great grandchildren are the embroidery work Christmas Stockings he has done for each of them. He loved to sing & passed that love on to his family, and he especially loved to drop the last note an octave...simply because he could! He loved hunting with his boys & fishing with everyone in the family, and always said he felt closest to his Heavenly Father when he was outdoors. He married Nancy Lee Mae Porter, the love of his life, on September 16, 1960. They had a wonderful 53 year marriage. He is now happily reunited with her at last. He is survived by his brother Dixon V. (Lee Etta) Daines, children Sherri Lyn & Richard Bosworth (Brian, Maegan & Justin), Amy & Steve Wallace (Alexia, Samantha, Jessica, Gordon, Miranda, Daines, & Cecelia), Chad ( Brittany, Daniel & Anna), Todd (Eddie, Cooper), Melissa (Cassandra, Ashley, & Trevor), Jeremy & Shawna (Clarissa, & Jeremy), & 8 Great-grand children. He was preceded in death by his parents, the love of his life Nancy Lee Mae (Porter) Daines, brothers Lowell Raymond Daines, William Kay Daines & Grand-daughter Danielle. A graveside Memorial Service will take place July 12th 2014 at the Franklin Idaho Cemetery at 2pm. It will be followed by a Celebration of Life at the Horsely Park in Brigham City UT starting at 4 pm. Please bring any pictures and memories you have to share. Horsely Park 560 S Main St Brigham City, UT 84302

The family of Sheridan Lynn Daines created this Life Tributes page to make it easy to share your memories.