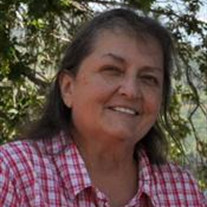 Shirlee Ann Joseph Beck, 65, passed away January 18, 2014 in Sandy, Utah in the presence of her daughter, son-in-law, and her beloved grandchildren. She was born August 17, 1948 in Cedar City Utah to John Howard and Vilate Crawford Joseph. Shirlee grew up in Parowan where she graduated from Parowan High School and attended classes at Southern Utah State College prior to starting her own family. Shirlee married Lynn Arnol “Butch” Beck on December 10, 1971 in Las Vegas, Nevada. Their marriage was later solemnized in the St. George Temple. Butch and Shirlee settled in Parowan where they raised their three children. Shirlee lived for her children and kept herself busy raising them and helping out at her parent’s business, the Parowan Trading Center. A life-long member of the LDS church, Shirlee enjoyed her opportunities to serve and teach and often spoke of her time as a Relief Society teacher as a highlight of her church service. Later, Shirlee continued her retail career by working at K-Mart in Cedar City. Customer service was her specialty and she loved to make her customers happy. In 1989 Shirlee moved to Elko Nevada where she lived with Butch until his death in 2003. While in Elko, she worked at Roy’s Market and then resumed her K-mart career. Shirlee cherished the friendships she made with co-workers and customers alike and continued living in Elko and working at K-Mart until health issues forced her to retire in 2013 and she moved to Sandy to be closer to her daughter and grandchildren. Health complications due to diabetes and Alzheimer’s ultimately led to a brief period of hospice care immediately preceding her death. Shirlee is survived by Brothers David (Rosalee) Joseph, Mark (Jeanne) Joseph; Sisters Brenda (Allan) Day, Lynette Joseph; Children Bryan (Tammy) Beck, Daniel (Sherrie) Beck, JoAnn (Carl) Genta; stepchildren Butch Tabb and Teresa Gregory; 14 Grandchildren and 2 great grandchildren. Shirlee is preceded in death by parents, John Howard and Vilate Crawford Joseph; husband, Lynn Arnol “Butch” Beck; daughter Sarah Evelynn Beck; brother, John LeRoy Joseph; Sister Maxine Cooper; and grandson Michael Beck Showers. Funeral services will be held 1:00 pm, Saturday, January 25, 2014, at the Parowan LDS 1st Ward church. Viewings will be held Friday the 24th, 6-8 pm and Saturday the 25th, 11:30-12:30 at the church. Interment will be in the Parowan, Utah Cemetery.

Shirlee Ann Joseph Beck, 65, passed away January 18, 2014 in Sandy, Utah in the presence of her daughter, son-in-law, and her beloved grandchildren. She was born August 17, 1948 in Cedar City Utah to John Howard and Vilate Crawford Joseph.... View Obituary & Service Information

The family of Shirlee Ann Joseph Beck created this Life Tributes page to make it easy to share your memories.