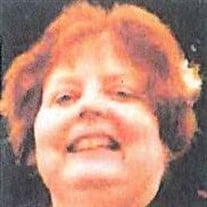 Shirley Marie Breukelman Retired Salvation Army Officer Born Shirley Marie Jackson, October 2, 1950 in North Platte, Nebraska to Earl and Lucy Jackson and Promoted to Glory, August 8, 2018 in Draper, Utah. She is survived by her brother Harold Jackson and sister-in-law, Vickie of Cody, Wyoming, Darlene Jackson of Henderson, North Carolina and LaRue Jackson of North Platte, Nebraska. Shirley began attending The Salvation Army at the age of five days old with her family in North Platte. Shirley participated in all Corps (church) activities and dedicated her life to God in February 1965. Attending a business school in Denver, she met Harm Breukelman who became the love of her life and they were married June 1974. Feeling the call to be a Salvation Army Officer (pastor), the Brukelmans moved to Bozeman, Montana to lay the groundwork for opening The Salvation Army ministry there. Later they were sent to Laramie, Wyoming and then spent a short time working at the Intermountain Divisional Headquarters in Denver. Entering the Salvation Army School for Officers Training, January 1979, they were ordained in 1980 as members of the Proclaimers of Salvation Session. The Brukelmans jointly served as Salvation Officers in Grand Junction and Colorado Springs, Colorado; Ogden, Utah; and a second time in Butte, Montana. Harm became terminally ill in Butte and was Promoted to Glory in 1991. During this time Shirley held fast to her faith in God and continued to serve in Butte as a single officer for another two and a half years for a total of ten years. In 1993 she received the prestigious Salvation Army “Frontiersman of the Year Award” for her faithful and innovation work in Butte. After her service in Butte, Shirley was assigned to assist in Salt Lake City and command in Laramie, Wyoming. One of her joys came in her appointment as Chaplain for The Salvation Army Silvercrest, a senior retirement community in Santa Cruz, California. Shirley enjoyed working with the seniors along with her dog, “Johnny.” She retired from active Salvation Army duty as Associate Officer in Santa Cruz. Even in retirement she trusted God’s work of grace in her life as He enabled her to continue loving and serving Him. Shirley’s life Scripture verse, Romans 8: 28 – “And we know that all things work together for good to them that love God, to them who are the called according to His purpose.”, enabled her to remain faithful to her dedication to proclaim salvation to all. Shirley loved serving the Lord and the people He placed in her path along the way. Never having children of her own, she became “mom” to many children God presented to her in her appointments. Shirley always had a song in her heart and word of praise to her Lord and Savior, Jesus. She will be buried with her husband, Harm, in Denver, Colorado. A celebration of Life for Major Shirley will be held Saturday, September 15, 2018 at 1:30 PM at The Salvation Army, 438 S. 900 W., Salt Lake City, Utah. Light refreshments will be served following the celebration.

The family of Shirley Marie Jackson Breukelman created this Life Tributes page to make it easy to share your memories.