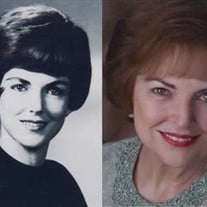 Shirley was born into the loving family of Wilford Joseph and Lorene Hatch Haacke, the younger sister to John Wilford. They resided in Bountiful, Utah. Many of the unique character traits that made Shirley such a warm, caring accepting, and selfless person were exemplified and cultivated in the home of her youth. The Haacke home was a gathering place of great love and laughter where all were welcomed and adopted as family. The same is true of the Egginton Household as Shirley incorporated the same feelings and values into the home she later created. Music was cherished and fostered from the beginning of Shirley's life. Her mother was a consummate pianist, accompanist, and organist. Her father, a gifted violinist and her brother John, accomplished on the piano. This is where Shirley's musical gifts were nurtured and developed into her signature vocal talent. Shirley performed during all her high school years in theater and with a musical trio called The Three Notes. She served as Student Body Vice President at Davis High School where she graduated Valedictorian of her class in 1952. As a tall, naturally beautiful, and talented woman, Shirley was chosen as 1st Attendant in the Miss Bountiful Pageant and would have represented the city in the Miss Utah pageant had she not fallen for Lt. Gilbert Glade Christensen, an Air Force Pilot to whom she was married for three short months until his untimely death. Then, a grieving young widow, Shirley was encouraged to audition for the Tabernacle Choir. She became a member in 1954 and that's where the magic began! At the time there were very few single members of the choir, so a certain soprano and handsome, "available" bass - Donald R. Egginton, didn't go unnoticed by a chorus of matchmakers. Their courtship began and was nurtured through a six week European Choir Tour in 1955. Joint tenure in the choir together continued until their release in 1980. During those years they were able to travel the world together and share the gospel through music. It was their most beloved calling. Donald and Shirley were married civilly in the Salt Lake Temple March 30, 1956 and sealed August 23, 1963. As a couple, they continued the love of music in their home, in the choir, and with a professional quartet called The Tall Four. They became the parents of four children, Kim, Brad, Duff, and Mindy -- all who were born during the years of choir service and lovingly refer to themselves as "Choir Brats." The arrival of 14 grandchildren and five great grandchildren made Shirley a "Nana" and "Nana Great" -- endearments that brought inexpressible joy. She was the perfect Grandma! She made every holiday and birthday extra special and "R & R" at Nana's was cherished. Shirley had many creative abilities and interests. For many years she served a as volunteer at The Beehive House in downtown Salt Lake City. She was an accomplished seamstress, designing and creating her own clothing. Knitting was a passion, which lead to a venture with her best friend and neighbor, Jeneel Johnson. Together they created and operated The Spinning Wheel, an art needlework shop located in downtown Bountiful. They were affectionately known as "The Big Wheel" and "The Little Wheel" where "Fun was spun for you!" True, lasting and meaningful friendship was the hallmark of her existence. There were no strangers to Shirley. Her gifts of friendship, compassion, trustworthiness, wisdom, and service were offered freely to all. Shirley was so easy to know and love. Friends were her lifelong treasures. There are many groups of friends still deeply entwined in our family's lives today. The VA Hospital Group, The Canyon Rim Group that were all newlyweds raising their families together, "The Choir Gang" with infamous antics and whose tender mercies were countless and life changing. Shirley and Don have been a part of a study group that has met regularly every month for over 65 years and who continue to meet today. Shirley lost herself in the service of others who then selflessly returned in kind all the love and care given. Gratitude for the example and influence of these people and their selfless service cannot be fully expressed. They have carried Shirley and her family through years of trial, both physical and emotional. Her truest champion, support and caregiver has been her saintly husband, Don. For decades he has been by her side through sorrow, suffering, pain, confusion, and hopelessness. He has never wavered in his dedication and devotion to his beloved "BN" (Button Nose). She in turn has been his greatest gift and source of joy. Theirs is indeed a celestial bond. From early youth until her death at age 80, Shirley was and is, a pure example of unconditional love and enduring faithfully with a cheerful countenance. She filled many roles and had countless notable accomplishments, chief among them, being a devoted disciple and follower of Jesus Christ. Our favorite and most tender memories are all surrounded by beautiful melodies. Sing beautiful songs again Shirley !! Your are loved "More Than Tongue Can Tell!" She was preceded in death by her parents Wilford "Wiss" and Lorene Haacke and Steven T. Smith -- son in law. She is survived by her husband -- Donald R. Egginton, brother -- John (Ada) Haacke, Children -- Kim Smith, Brad (Kim) Egginton, Duff Egginton, and Mindy (Lowell) Bennett. Grandchildren -- Tony, Parker, Adam, Samantha, Alison, Lily, Joshua, Braquel , Justin, Kaleb, Kimmie, Zade, Steele, and Kael. Great Grandchildren -- Indie, Beckham, Eden, Halle, and Addison. Funeral services will be 11:00 am, Saturday, October 25, 2014 at the Bountiful 26th Ward LDS Chapel, 200 North 200 West, Bountiful, Utah where a viewing will be held Friday from 6:00 to 8:00 pm and Saturday prior to services from 9:45 to 10:45 am. Interment at the Bountiful City Cemetery.

Shirley was born into the loving family of Wilford Joseph and Lorene Hatch Haacke, the younger sister to John Wilford. They resided in Bountiful, Utah. Many of the unique character traits that made Shirley such a warm, caring accepting, and... View Obituary & Service Information

The family of Shirley Lorene Haacke Egginton created this Life Tributes page to make it easy to share your memories.

Shirley was born into the loving family of Wilford Joseph and...