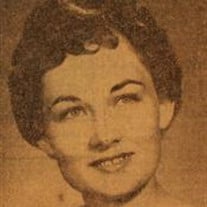 The Life Story of Shirley Arlene Bailey McIntosh I, Shirley Arlene Bailey McIntosh, was born July 9, 1934, in Nephi, Utah. [I also lived in Price, Lehi, and American Fork.] My father [(Raymond Thomas Bailey)] was a teacher and principal at American Fork High Seminary. My mother [(Mary Romney Bailey)] was a piano teacher and ward and stake organist for many years. [I had a younger sister, Barbara, and a younger brother, Tom. I was baptized in Nephi on August 1, 1942.] My father’s grandfather [Langley Allgood Bailey] emigrated to Utah with the Martin Handcart Company, and my mother’s people [(the Romneys)] pioneered the St George and Mormon Colonies in Dublan, Chihuahua, Mexico. I graduated from American Fork High School and Brigham Young University. [In high school, I accompanied the Men’s Chorus for two years. I was in the Color Guard for the band and the Beethoven Club. I was active in many other activities and clubs. I was the first attendant to the American Fork Steel Days’ Queen.] My [college] major was elementary education. At BYU, I was a Cougarette for a short time, until I decided to become a member of the BYU AFROTC Sponsor Corps. In my senior year, I was asked to be the Sponsor Corps Commandant. After graduating from BYU, I taught at Midvale Junior High School for a year. I really enjoyed being a teacher, but I had always wanted to become an Airline Stewardess. United Airlines gave me that opportunity the following summer. I was domiciled in Chicago. I met Captain Gordon Y. McIntosh at Logan Square Ward. We became engaged at the Gold and Green Ball and were married that summer in the Salt Lake temple on August 14, 1958. We first lived in Chicago, where our first two children, Bonnie Del and Gordon Thomas, were born. We were transferred to Kansas City, MO. Marci Ellen was born in Jackson County, and James Joseph was born in Richmond, Ray County, MO. [We lived in an early 1900s house, which was built on the Santa Fe Trail. Our previous backyard is now a Wildlife Preserve and Historic Site. I was trained as a teacher in the Montessori method of education in Blue Springs, MO.] Gordon and I had many opportunities to serve in church and community callings. Gordon was a counselor in the Elder’s Quorum presidency and later was called as a counselor in the bishopric. [Among many other church callings,] I served as ward Relief Society president, ward Primary president, [ward Young Women’s president, ward or stake YW camp director for eleven years], and Kansas City Stake Primary president. [I had the opportunity to serve as Orem High PTA president for three years, as well as volunteer at all my children’s schools.] We moved to Orem, Utah, in June of 1973. We traveled with several plants and Tom’s pet boa constrictor snake. Rebecca Dian was born in Provo, UT. In 1977, Gordon was asked to go to Saudi Arabia to help train the Saudia Airlines’ pilots. That was a good experience for us. We honored the Sabbath on Friday, and under Saudi law, women were forbidden to drive. Marci and James attended school at the People’s Consolidated Schools in Jeddah. Our Christmas present in 1978 was a Camera Safari to Kenya, Africa. We also enjoyed a trip to Karachi, Pakistan, where Gordon had a three-day layover from a flight. While still in Saudi Arabia, I had the opportunity to chaperone Bonnie when she toured the Holy Land. Other travels we have enjoyed include tours of China, London and the British Isles, Hawaii, Alaska, and India, where we visited the Taj Mahal. In Calcutta, we picked up an Indian baby that my cousin had adopted. We also enjoyed motor home tours of the eastern and southern states of the USA. [After returning from Saudi Arabia, I helped create, and eventually became the director of, the Parent Educational Resource Center in Orem. I was passionate about education and families and served there for over seven years. I loved music and learned to play the cello, the bass, the violin, the piano, and the organ. I loved to sing and performed for several years with the “Sweet Adelines” barbershop group in Raytown, MO. I have six grandchildren: Valerie and Travis Jones, Tyler and Aubrie McIntosh, and Aaron and Haley McIntosh. I loved to play games and spend time with them.] [Gordon and I] recently served an LDS mission for the Church in Johannesburg, South Africa, as employment specialists. We were able to complete the training for every unit assigned to us, including: Johannesburg, SOWETO, Benoni, East London, Durban, Hillcrest, and Pretoria. [We loved being in South Africa and consider our time there a highlight of our lives together. After coming home from South Africa, I was diagnosed with Lewy Bodys disease. My sweet husband was my primary caregiver for many years. I passed away peacefully at home, Thursday, September 6, 2012, surrounded by my family and friends. I had many loving caregivers from Alpine Home Care and Hospice during the final year of my life, including Jodi, Donna, Jason, and Carrie. Marilyn and “the Happy Chappy,” also from Alpine, thoughtfully cared for Gordon while he cared for me. My love and thanks to all of them.] (Written by Shirley McIntosh and edited by her family)

The family of Shirley Arlene McIntosh created this Life Tributes page to make it easy to share your memories.