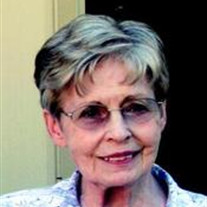 BOUNTIFUL- Shirley Mae Pilkington, loving wife, mother, grandmother, great-grandmother, sister and friend, passed away Sunday, 29 December 2013, at the age of 86. Shirley was born at her home in Logan, Utah, to Elwood William Smith and Ida McBride, on 7 October 1927. Shirley married her sweetheart, Earl W. Pilkington, upon his return from the U.S. Navy, on 23 September 1946, in the Salt Lake City Temple of The Church of Jesus Christ of Latter-day Saints. Shirley and Earl enjoyed 62 wonderful years together. She was an active member of the LDS Church and gladly served when called. She served in the Primary and Relief Society in her wards in California and Utah, and especially relished working with the young children of the Primary. Shirley was also a member of the Daughters of the Utah Pioneers and enjoyed her association with the women of that organization. Shirley is preceded in death by her loving husband, Earl, sisters LaDawn (James) Roberts and Barbara (Richard) Jas and is survived by her sister Peggy Ann (Alton) Hoffman and her four children and spouses: Rodney & Lisa Pilkington (Shingle Springs, CA); Marsha & James Koury (Bountiful, UT); Steve & Carol Pilkington (Highlands Ranch, CO); Brad & Leslie Pilkington (Gig Harbor, WA); along with twelve grandchildren and nineteen great-grandchildren Funeral services will be held on Monday, 6 January 2014, at 1:00 P.M., at the Mueller Park Fifth Ward Chapel, 1320 East 1975 South, Bountiful, Utah. A viewing, prior to the funeral services, will be held from 11:30 A.M. - 12:30 P.M. Interment will be at Lakewiew Memorial Park in Bountiful, Utah.

The family of Shirley M. Pilkington created this Life Tributes page to make it easy to share your memories.