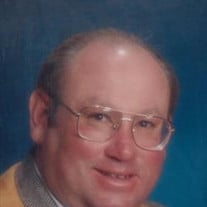 Skip Ward Holling, our beloved husband, father, grandfather, brother, son, uncle, teacher and friend, passed away July 1, 2015 at the age of 63 from complications of a ruptured appendix. Skip was born May 23, 1952 in Pasadena, CA to Phyllis Ward and Gerald M. Ropczycki, later adopted by Glenn J. Holling. In 1994, Skip married the love of his life and best friend Shauna Nelson at Abravanel Hall – but his most important wedding anniversary was the date of their Temple Sealing on January 4, 2003. Skip was a member of the Church of Jesus Christ of Latter-day Saints, he loved the Gospel, especially the Plan of Salvation. Skip loved his family, he had a very special bond with his grandson Dylan who called him Pop-Up. They shared many of the same interest, food, Lego’s, Minions, cars, and especially trains. Skip enjoyed music…Glenn Miller, Frank Sinatra, Henry Mancini, Glen Campbell and the Beach Boys (after all, he was born in L.A.) And he also played the trombone. He was an avid photographer especially of ghost towns, Native American writings and dwellings. As a pastime he enjoyed reading Louis L’Amour books, journaling his thoughts and traveling to some of the places mentioned in them and ANYTHING John Wayne. Skip was an 8th Degree Black Belt, he was fluent in many styles of martial arts, he was listed in “Who’s Who in American Martial Arts, and was a personal friend of Ed Parker (Kenpo). Skip served an LDS mission to the Australia South Mission 1971-1973. Some of the people he taught stayed in touch with him for the rest of his life. He grew up to be what every little boy wants to be: a cowboy at 5, a firefighter at 18, a police officer (15 years with Salt Lake County and 15 years Salt Lake City Parking Enforcement). Skip was a great man and will be missed by those who knew him. The family wishes to thank all who have shown such an outpouring of love, support and prayers, with special thanks to the West Jordan River 6th Ward. Skip is survived by wife, Shauna Nelson Holling; mother, Phyllis; sons, Skip Jr. (Amy), Brent, Joey Sanchez (Bil and Jason); and Adrian Sanchez; daughters, Elaina Sanchez (Lindsey); and Jenni “J” Holling-Roberts (Matt); grandkids, Lydia, Majesta, Leighton, Elijah, Shyann, Nick, Ivy, Michael and Dylan; and one great-grandson, Ayden; many brothers, sisters, nephews, nieces and friends. He is preceded in death by his brother, Forrest “Twig” Holling. “WE LOVE YOU!” Funeral Services will be at 11:00 a.m. on Friday, July 10, 2015 at the River 6th Ward Building located at 7350 South 1300 West (Temple Street), West Jordan UT. Viewing will be on Thursday, July 9, 2015 from 6:00 to 8:00 p.m. and one hour prior to the services at the church. Burial will follow services at the West Jordan City Cemetery.

Skip Ward Holling, our beloved husband, father, grandfather, brother, son, uncle, teacher and friend, passed away July 1, 2015 at the age of 63 from complications of a ruptured appendix. Skip was born May 23, 1952 in Pasadena, CA to Phyllis... View Obituary & Service Information

The family of Skip Ward Holling created this Life Tributes page to make it easy to share your memories.