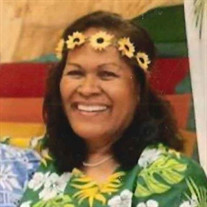 Solofifiloi Tapa Matavao Brown 1959 - 2018 Solo Brown passed away on the evening of November 10, 2018. Her family was at her bedside. Just ten minutes earlier a roomful of relatives expressed their love to her one by one. Oh, how we will miss you, Solo! We remember her for her peaceful nature; she was quick to forgive. We loved her wonderful, broad smile. She loved to laugh and always pointed out funny incidents in her life we could all laugh about with her. She loved her family so very much that she sacrificed much time and energy to do many things for them. She was active, and was always playing volleyball, tennis, or softball. She loved to play cards with family members. She loved to sing in church choirs and to sing along while playing her ukulele. Solo was born November 2, 1959 in Nu'uuli, American Samoa. Her father was Kilifi Tapa Matavao from Mulifanua, Western Samoa. Her mother was Faimafili Ta'ilele from Ofu, American Samoa. The Matavao family moved to Oahu, Hawaii when Solo was in the third grade. They settled in Waipahu, Oahu and she graduated from Waianae High School in 1978. She graduated from Cannon's International Business College of Honolulu the following year. She served a mission in Sacramento, California from 1982 to 1984 for the Church of Jesus Christ of Latter-Day Saints. She truly loved serving people for her Savior. She also taught children in the Primary organization of the church and led sisters in the Relief Society organization of the church. She lived exercising a lot of faith in Jesus Christ. She relied heavily on Him throughout her years fighting breast cancer which she was diagnosed with in 2004. In August of this year it spread to her brain. Through the ups and downs of living with cancer she was humble and tried having a lot of faith in Heavenly Father and His beautiful plan. Seeing her faith in action and the way she handled her challenge gave us Hope. After her mission she moved to Salt Lake City to be near her brother, Liae. She soon met Mike while they were both working at a Fred Meyer store. She initiated the relationship, suggesting they eat lunch at a Chinese restaurant before the start of their shift. After eating, they had time to kill, so they sat in her car and listened to a tape she had of a famous Hawaiian comedian who did his routine in Pidgin English. She had to explain every joke to him, but he ended up laughing so hard with her that he fell in love with her. And the rest was history. They married on May 5, 1990 in Waipahu, Hawaii. They were sealed in the Seattle Temple in 1995. She gave birth to three children and they raised their wonderful family in Renton, Washington from 1991 to 2001 and then in Taylorsville, Utah from 2001 to present. She served as a paraeducator at Fremont Elementary in Taylorsville from 2001 to 2018. She loved the children and cared about their well-being. She also worked part-time at an adult home for men with autism for the past ten years. She loved those individuals and showed them much devotion. Solo truly loved people. When you were around her you really felt her love for you. She knew the importance of Jesus Christ and her family in her life. Solo is survived by her husband Michael "Mike" Edwin Brown and their children Edwin Kilifi (Karlee) Brown, Alan Valoia "Val" Brown, and Leiani Faimafili Brown. She is also survived by her sister-in-law, Tausaga (Opetaia) Matavao, and her remaining siblings Maveve "Veve" (Larry) Cordle, Kilifi (Pavitt) Matavao, Leaniva "Niva" (Puletua) Wilson, Salasopa "Sopa" (Lepepaina "Pepa") Matavao, Epati "Pati" (Ruta) Matavao, Ulavale "Ula" (Marie) Matavao, and Liae (Roseanne) Matavao.She was preceded in death by her parents, her brother Opetaia Matavao, sister-in-law Marie Matavao, nephews Tyson Matavao, Westley Matavao, Kilifi Matavao, and niece Tammy Matavao. Funeral services will be held Saturday, November 17, 2018 at 11 a.m. at the Taylorsville 15th ward chapel, 1457 Atherton Dr. Friends and family may call at the same ward building Friday evening November 16, from 6 to 10 p.m. and Saturday morning from 9 to 10:30 a.m. Burial will be at Mount Olivet Cemetery, 1342 E 500 S Salt Lake City.

Solofifiloi Tapa Matavao Brown 1959 - 2018 Solo Brown passed away on the evening of November 10, 2018. Her family was at her bedside. Just ten minutes earlier a roomful of relatives expressed their love to her one by one. Oh, how we will miss... View Obituary & Service Information

The family of Solofifiloi Tapa Matavao Brown created this Life Tributes page to make it easy to share your memories.