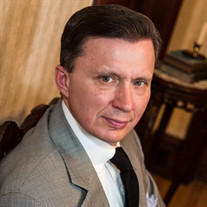 Spencer Kimball Bennett was born on February 6, 1958 in Hartsville, South Carolina. He passed away on April 20, 2021 in Provo, Utah, following a short bout with pancreatic cancer. Spencer met his eternal companion, Ivonne Echandi, in Raleigh, North Carolina, and the two were married in the Washington, D.C. Temple on August 11, 1981. Spencer was the proud father of five children: Ashley, Andrew, Allison, Anna, and Adam. The first two “A” names were coincidence, but thereafter Spencer thought it important to stay with the “A” theme, to the consternation of anyone who tried keeping the names straight (including Spencer). He was also a proud and loving grandfather (or “Bapa” as he was known) to his nine grandchildren. While Spencer was a proud alumnus of Brigham Young University (B.S, M.B.A.), when it came to athletics, Spencer was a Carolina Tar Heel fan first and foremost. Indeed, his fandom is representative of Spencer as a whole. While Utah was Spencer’s home for the past 20 years, and he greatly enjoyed his time there, Spencer was a Carolinian through and through, and his love for and connection with the South never diminished. A sharp dresser, a polite and kind person, and the embodiment of quiet dignity, Spencer often garnered respect without demanding it. Spencer loved simple things: the gospel of Jesus Christ, American flags, Rain Forest Crunch ice cream (bring it back Ben & Jerry), a crisp dress shirt, Carolina barbeque, shooting hoops, the mountains, John Denver, and spending time with his family. Spencer’s one request was to be buried in Greensboro, North Carolina next to his son, Adam, the only member of Spencer’s immediate family to precede him in death. A graveside service will be held there, in lieu of services in Utah.

The family of Spencer Kimball Bennett created this Life Tributes page to make it easy to share your memories.

Spencer Kimball Bennett was born on February 6, 1958 in Hartsville,...