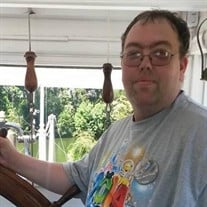 “A hero isn’t measured by the size of his strength, but by the strength of his heart” ~Hercules~ A true hero, Spencer Blair, left this mortal existence on the morning of January 22, 2020 at the University of Utah Hospital. Spencer was born in Ogden, Utah September 21, 1981 to Ron and Jane Blair of Clearfield. Spencer has been a lifetime resident of Davis County and graduated from Clearfield High School, class of 2000. Shortly after graduating Spencer served a mission for The Church of Jesus Christ of Latter-day Saints to Charlette, NC where he learned to love Squirrel Gravy. December 27, 2013 Spencer married Andrew Lund, they were currently residing in Layton, UT. Spencer joined the love of his life Andrew in creating the Adventure Vlog. Shortly before entering the hospital Spencer started a YouTube channel to support those with Diabetes. At the time of his passing Spencer was employed at Walmart in Centerville. Previous to this he worked at Maverick, Flying J, Artic Circle and Lagoon. In Spencer’s spare time he enjoyed sharing his extraordinary knowledge about Disneyland, spending time with his family and joining Andrew Ghost Hunting. Spencer is survived by his spouse Andrew Lund (Layton); parents Ron & Jane Blair (Clearfield); siblings Naomi & Richard Gardner (West Virginia), Aaron & Margarete Blair (Wyoming), Amelie Blair (Clearfield, UT), and Mary Blair (Clearfield, UT); many nieces and nephews. He was proceeded in death by his grandparents. “No matter how are hearts are grieving, we will keep on believing, then all that we wish will come true,” ~Cinderella~ Spencer we will dream of seeing you again. Services for Spencer will be held at 12 Noon, Tuesday, January 28, 2020 at the Falcon Ridge Ward, 1325 E Cherry Lane, Layton, UT with a visitation one hour prior to services where family and friends may offer their condolences.

&#8220;A hero isn&#8217;t measured by the size of his strength, but by the strength of his heart&#8221; ~Hercules~ A true hero, Spencer Blair, left this mortal existence on the morning of January 22, 2020 at the University of Utah Hospital.... View Obituary & Service Information

The family of Spencer Mathieu Blair created this Life Tributes page to make it easy to share your memories.

“A hero isn’t measured by the size of his strength, but by the...