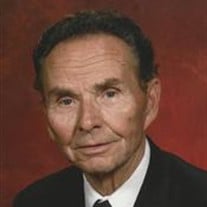 Stan passed away at the age of 85 in Orem, Utah on Sunday, May 12, 2013 from complications due to lung cancer. Stan was born on November 10, 1927 in Siedlec, Poland to Karolina Wavrata and Piotr-Pawel Koza. He was the fourth of eight children. After graduating from Jagiellonian University in Krakow with a degree in medicine, in 1962 Stan immigrated to the United States to pursue the American Dream. He came to Ogden, Utah to pursue his medical career at the old McKay-Dee Hospital where he met Peggy Willey. They married in 1965 and resided in Arizona, and then Florida where their son Stanley James (Jimmy) was born. In 1968 Stan settled his family in Ft. Oglethorpe, Georgia and shortly thereafter his daughter Michele Karoline was born. They moved a short distance to Chickamauga, Georgia where Stan lived until his retirement in 1997. While in Chickamauga Stan practiced medicine at Hutchison, Erlanger North and Erlanger Medical Centers. He developed a great respect and friendship for the nurses and doctors with whom he served. Stan was board certified in the three medical specialties of Family, Pediatric and Emergency Medicine. He was one of the first American board certified physicians in emergency medicine and was a founding member of the Emergency Room Department at Hutchison Medical Center during the 1970s and later Erlanger North Hospital. He is a member of the AMA and FACEP. Stan was an active educator in the field of emergency medicine and an overall humanitarian of medicine. He was sought after by patients and known for his kind bedside manner. Though he could be tough and demanding on his nurses and partners, he was a true friend to many in the medical community. Stan most enjoyed farming and being outdoors which reflects his Polish farm boy roots. He had farms in Chickamauga and LaFayette, Georgia which provided many, many hours of peace and fulfillment. His children joked that he loved his cows more than them because the cows received such special treatment and care from Stan. He also loved clearing the land, chopping wood, cutting and baling hay every season. In LaFayette, the family spent many days swimming in the river, looking for arrowheads, and roasting hot dogs. Stan was an avid fisher throughout his life and enjoyed the friendships of those who fished alongside him. He was also a runner and skier. He skied until his 79th year both on the slopes of Utah and Krynica, Poland. His love of health and fitness was with him until the end. He would wake and run an hour a day up until nearly two week prior to his death when his weak body no longer allowed. Stan has remained an active member of the Catholic faith. He had a deep devotion to his faith and was most proud of John Paul the II who was a fellow Jagiellonian graduate and native Pole. Stan appreciated his dual US and Polish citizenship with a deep respect for both countries. In 1997 Stan moved back to Utah to be closer to his daughter and grandchildren. He has been their biggest advocate and fan their whole lives. These grandchildren were poked and prodded much more than others in the name of medicine because of their concerned grandfather. But they will always remember hikes in the mountains, skiing, mowing the lawn, and wonderful times spent with their adoring Dzaidek. Stan is survived by his daughter Michele (Brad) and his five grandchildren Karoline (Steven) Fisher, Benjamin, Emmalee, Brooklyn, and Nicholas. Brother Joseph and Sister Janina and many close nephews and nieces in Poland. Stan was preceded in death by his son Jimmy (Heather) Martynski. In his later days Stan reminisced and expressed gratitude to those many friends and family that influenced his life. He will be missed by many. Funeral services will be held 11:00 am Friday, May 17, 2013 at St. Vincent’s Church, 1375 Spring Lane, Salt Lake City, UT 84117. A viewing will be held one hour prior.

Stan passed away at the age of 85 in Orem, Utah on Sunday, May 12, 2013 from complications due to lung cancer. Stan was born on November 10, 1927 in Siedlec, Poland to Karolina Wavrata and Piotr-Pawel Koza. He was the fourth of eight children.... View Obituary & Service Information

The family of Stanislaw Martynski created this Life Tributes page to make it easy to share your memories.