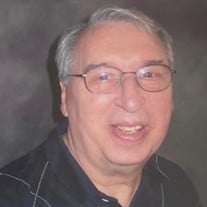 Stanley Everett DeAdder 1937 - 2021 Stanley Everett DeAdder, dad, grandpa, brother, uncle, friend and beloved husband, passed away surrounded by family on Dec 31, 2021, in Orem, Utah at the age of 84. Stan was born in Nova Scotia, Canada on Aug 30, 1937, one of nine children born to Basil Everett DeAdder and Udavila “Bernice” Varner. Stan shared a love of horses and camping with his dad which might explain his appreciation for old westerns. He adored his mum, even kicking a salesman out of their home once for being rude to her. He loved and was loved by his family and siblings and from them earned the nickname “Talks” for his ability to talk to anyone about anything-for however long you wanted to talk. Stan married Donalda Louise Sanford in Nova Scotia in 1956. In 1961, they moved with their two young children to Utah where they had five additional children. After raising their children and more than 40 years of marriage, they divorced. Stan spent years working in the office equipment industry, requiring extensive travel throughout his sales region which encompassed the western US. Stan opened “The DeAdder Shop” in Orem specializing in office supply retail and repair services. He loved to spend time there fixing things, talking with clients, and creating solutions that required out-of-the-box thinking, all the things he was so talented at. The last years of his professional life were spent as the administrator for Advantage Home Health Care, a role he loved. Stan spent 23 years coaching boys basketball, baseball and girls softball teams. He was a huge fan of BYU football, basketball and the Utah Jazz. He loved a good competitive game of racquetball and (while some might not call it a sport he might beg to differ), a good night of card playing. In April 2006, Stan met his true love, soulmate and his favorite chocolate chip cookie maker in the whole world, Carol Anne Tiemann. What began as email communication resulted in a first date that lasted eight hours as they talked about the things they had in common including their shared birthday month of August, their mutual love of their native Canada, their respective grown children and perhaps a one-sided conversation about those Cougars and the upcoming season. They married shortly after they met (when you know you know), on June 10, 2006. One of the things Stan loved was genealogy and family history. Together he and Carol served a 28-month family history mission for The Church of Jesus Christ of Latter-Day Saints. He also spent time discussing family history with his nieces in Nova Scotia whom he adored. Stan is survived by his wife Carol, his children: Chris (Karen) DeAdder, Kim-Michelle (Scott) Pullan, Stefani (Stephen) Ellison, Kevin DeAdder, Craig (Stephanie) DeAdder, Tyler DeAdder, and Tiffani (Michael) Ericksen and by Carol’s children who loved and accepted Stan from the beginning: Cathy (Alan) Colton, Ron (Shannon) Hendrix, Greg (Angela) Hendrix, Julie (Steve) Palmer, Paul (MaryAnn) Tiemann, Missy (Ryan) Hartman, Todd (Jessica) Tiemann, Matt (Courtney) Tiemann. Stan was the proud Grandpa of 58 and great Grandpa of 33. Stan is preceded in death by his parents, siblings: Roy (Loretta) DeAdder, Ron DeAdder, Doris Wanamaker, Marjorie (Don) Welton, Sandra DeAdder and is survived by siblings Joyce Alders, Harold DeAdder and Patsy (Dana) Pynch all of Nova Scotia. And now your pain has ended Stan and as our sorrow runs deep, we are comforted by the wondrous rejoicing taking place in the glorious reunion with those who have been awaiting your arrival on the other side. While the voice of Stanley Everett “Talks” DeAdder may seem silent on this side, the words spoken of him by those who know and love him will continue the conversation until we can meet again. Goodnight for now caring, giving, loyal, compassionate, honest, generous, mischievous, huggable, sports loving, card playing, greatest brother, gentle Dad, loving Grandpa and eternal companion. Funeral services will be held 12:00 Noon, Friday, January 7, 2022 at the Aspen 6th Ward Chapel, 1546 North 1100 West, Orem, Utah with a viewing prior to services from 10:45 to 11:45 am. Interment immediately following at the American Fork Cemetery, 26 West 600 North, American Fork, UT.

The family of Stanley Everett DeAdder created this Life Tributes page to make it easy to share your memories.