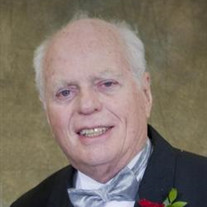 Stanley Charles Parker returned to the arms of his Heavenly Father on Sunday, November 23, 2014, surrounded by his loving wife and family. He was born in Salt Lake City, Utah on May 31, 1931 to LeRoy Virgil and Elsie Stevenson Parker. Stan married Clara Louise Moore on June 22, 1959. When Stan was seven, his father passed away. He grew up in Sugarhouse with two brothers, raised by his loving mother. Music was a vital part of this little family’s life. Stan’s father was a pianist, and his mother made certain Stan and his brothers learned to play. They all became accomplished musicians. Stan played the piano and could turn any piece of music into a jazz performance. He played piano, drums, and bass in a jazz band with some friends and his brothers for many years, often performing ‘dance jobs’ at Fort Douglas. Stan graduated from South High and continued his education at the University of Utah, graduating with a Bachelor’s Degree in Education. Stan was a member of the ETA (Emerson Tennis Association). He and his friends formed this association, naming it after the LDS ward they grew up in. Members of the ETA remained friends throughout their lives. Stan cherished the friendships he had as a young boy growing up in the Sugarhouse area. Stan was smitten the first time he saw his sweetheart, Louise, and he adored her the rest of his life. They were sealed for time and eternity on June 22, 1959 in the Salt Lake Temple. Yellowstone was Stan’s favorite vacation spot and that is where he took his new bride for their honeymoon. They traveled all over the states (visiting each state at least twice), either in the old station wagon (with all five kids, plus a grandma) or in their motor home. In their later years, they turned many of their vacations into temple hopping trips. They loved spending time at their cabin in the Uintah Mountains, and Trial Lake was a favorite fishing spot. They went to New Zealand to pick up their son, Terry, from his mission and then met the rest of the family (including both grandmothers) in Hawaii for a wonderful family vacation. Stan and Louise created a home filled with love and music that continues in the lives of their posterity. Stan was a humble, loving, and gentle man. He never uttered an unkind word to anyone, and he expressed his love for Louise, his children, and grandchildren in word and deed throughout his life. One of the ways he expressed his love for his family was by giving everyone a nick name. Stan was always laughing and happy. He loved to have fun and had a great sense of humor. This was always evident when he and his brothers, Richard (Dick) and David, would get together. Stan loved photography, buying cars, and house hunting. There were many times no one knew where he was only to find out he was looking at a car or a house that was for sale. Stan was a 4th and 5th grade school teacher for 14 years. He also worked for the United States government for 29 years, including ‘picking points’ and ‘cutting donut holes’ for the USDA. Many times, he was approached by former students who expressed gratitude for the positive impact he made on their lives. Stan was a faithful member of the Church of Jesus Christ of Latter-day Saints. He served as a Webelos leader, a cub master, in the Sunday School presidency, pianist for priesthood, ward historian, and as a Stake clerk for many years. Stan had a beautiful, high tenor voice and always enjoyed singing in the ward choir. Stan and Louise served an inner city mission in Salt Lake City, Utah. They loved serving a mission together and have fond memories of friends made during their service. Stan served as a temple worker in the Salt Lake Temple for 20 years. He loved the gospel and especially loved to hear Louise read the scriptures aloud, often asking her to continue reading when she was ready to stop. Stan was preceded in death by his parents and brother, Richard. He is survived by his wife, Louise and their five children and their spouses: Terry (Lisa), Carol (Brian), Julianne (Todd), Nancy (Russell) and Pati (Jan), twenty-two grandchildren, one great grandson, one more great grandchild coming this spring, and his brother David (Bonnie). A viewing will be held Friday, November 28, 2014, from 6:00 pm to 8:00 pm at the Parkway LDS Ward located at 12120 South 1300 W. Funeral services will be held in the Parkway LDS Ward building on Saturday, November 29, 2014, at 11:00 am. A viewing will be held prior to the funeral services from 9:30 am to 10:45 am. The family extends their gratitude to Envision Home Health and Hospice for making it possible for Stan to stay home with Louise. With special thanks to Ann, Ashley and Rita. We sure will miss you Dad, but are certain you are busy continuing the work Heavenly Father has for you on the other side. Perhaps focusing and unfocusing family movies up in heaven! You don’t feel so very far away. In lieu of flowers, please consider a donation to the Church of Jesus Christ of Latter-day Saints Perpetual Education Fund or General Missionary Fund.

Stanley Charles Parker returned to the arms of his Heavenly Father on Sunday, November 23, 2014, surrounded by his loving wife and family. He was born in Salt Lake City, Utah on May 31, 1931 to LeRoy Virgil and Elsie Stevenson Parker. Stan married... View Obituary & Service Information

The family of Stanley Charles Parker created this Life Tributes page to make it easy to share your memories.

Stanley Charles Parker returned to the arms of his Heavenly Father...