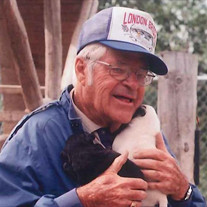 Stanley Ross Strader, age 96, died peacefully June 29, 2019 at the Salt Lake Veterans Home. He was born in Bismarck, MO July 15, 1922 to Homer Lee and Zella Wallis Strader. He was the 6th of 7 children and has outlived his entire family. Right after he graduated from high school, he enlisted in the Air Force and proudly spent the next 3 years in the South Pacific during World War II. He married Veda Mae Dare and they had two boys. After moving to Salt Lake City, they were divorced. He later married Nancy Reherd Gipson in Salt Lake City on May 30, 1975. After he was discharged from the Air Force he worked at an airline for several years before becoming a long-haul truck driver for IML where he received a certificate from the American Highway Accreditation Association for 5 million accident free miles. Stan always enjoyed the outdoors; as a boy, taking a peanut butter sandwich and going fishing with friends out in the woods. As a teenager he enjoyed basketball, baseball, motorcycles (racing for Harley Davidson for a short time). He was a golf enthusiast and even got a hole in one. He enjoyed belonging to many organizations such as camping club, jeeping, Masonic and church. He was a Past Patron of Canyon Lodge #13, a Past Patron of Martha Chapter #7 and Past Grand Patron of Eastern Star in Utah. For about 10 years he volunteered as janitor for the Scottish Rite Children’s Learning Center and served on the Board of Directors for several years. His motorhome, jeep/boat seldom left the yard without a grandchild or two to water ski, explore the Red Rock country, or camping in the mountains. His passion was challenging the many trails in the Moab area. Stan and Nancy spent much time traveling with friends to Mexico, Alaska, and the Western States. Stan always had a smile and a hug for everyone, one time breaking his sister’s rib with one of his hugs. Thank you to all the staff at the Veterans Home and Bristol Hospice for all your care and patience. Memorial services will be held at 11:00 am at the First Congregational Church at 2150 South Foothill Drive, SLC, Saturday, July 13, 2019 with Masonic services at 2:30 at City View Memoriam, 1001 East 11th Avenue, SLC.

Stanley Ross Strader, age 96, died peacefully June 29, 2019 at the Salt Lake Veterans Home. He was born in Bismarck, MO July 15, 1922 to Homer Lee and Zella Wallis Strader. He was the 6th of 7 children and has outlived his entire family. Right... View Obituary & Service Information

The family of Stanley Ross Strader created this Life Tributes page to make it easy to share your memories.