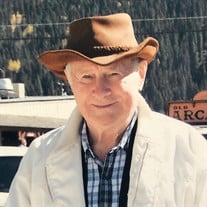 Stanley Levi Thornton, 91, beloved husband, father, grandfather, great grandfather and brother passed away on Wednesday, August 28, 2019 in Murray, Utah. He was born on June 28, 1928 in Idaho Falls, Idaho to Harry P. Thornton and Grace Hammon Thornton. He attended Rigby High School where he graduated in 1946. Shortly thereafter, he followed the love of his life since 3rd grade, Donna Pinnock, to California. They were married on July 1, 1950. Stan was an avid fisherman and loved to travel. During his time with Hughes Aircraft Company, he was able to travel the world, visiting countries all over the Middle East and Europe. One of the things he was known for was his “Old Indian Chief” stories. He is survived by his daughter, Bonnie Thornton Meyerson; his grandchildren, Jason, Amber, Robin, Travis, Chad, Derek and Jodi; 8 great grandchildren, Lexi, Lucy, Ashlin, Tayley, Ayden, Livy, Kate and Kai; sister, Kerry and many nieces and nephews. He is preceded in death by his parents; beloved wife, Donna; son, Ronald; sisters Donna, Jean, and Elaine; brother, Glen, and great grandchildren, Jacob, Micah, Alison, Heidi, and Noah. Services will be held at the LDS Chapel, 5550 Ohio Street, Yorba Linda, California, on Saturday, September 7, 2019 at 1:30 PM. In lieu of flowers, the family is requesting donations be made to The Ronald McDonald House Charity or The Crohn’s & Colitis Foundation.

The family of Stanley Levi Thornton created this Life Tributes page to make it easy to share your memories.