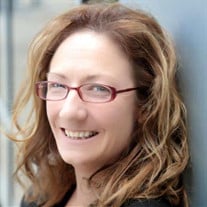 Whether you knew her as Stephanie or Stevi, you couldn’t forget her. Stevi didn’t have friends she had “families.” There was little she was afraid of trying and nothing she would not do for those she loved. Stevi barreled into our lives on March 9, 1973. She was a loving, gregarious, goofy child whose pranks brought laughter from the beginning. Stevi was a woman who marched to the beat of her own drum. She loved the great outdoors whether it was touring the back roads of the West on her motorcycle with her dad and uncle Mike, off-roading on her dirt bike, snowboarding in Utah canyons, running 5K races, hiking or canoeing with good friend “Crazy Lu” Rego, or camping with the family of Trell “Trailer Trash” Inzunza, who’s family she adopted as her own. She was a quick-witted smart ass with a knack for inciting laughter and bringing levity to uncomfortable or serious situations. She said “If I can make others laugh, that brings me the greatest joy even if they are laughing at me.” She was incredibly hard headed, fiercely loyal, and truly a bright light in this world. Stevi was an avid lover of animals. She was born with an “older sister” Mutley Jean, a beautiful Malamute who was her first best friend. Our family was later adopted by a stray cat, Sweet Pea, who grew up with Stevi and her sister Erica in Tabiona, Utah. Throughout her life Stevi continued to surround herself with other loving pets: Zoom the cat, Miss B the Chihuahua, Izzy the doggy pumpkin dancer, and Oy the cat, her final companion. Her dedication to the nursing profession was so remarkable. Stevi’s first foray into the medical field began in 1995 as a Certified Nursing Assistant. She then entered the military (Army Reserves) to train as a Surgical Technician. Her first venture as an educator was in 1998 as a Surgical Processing Educator at the U of U Hospital. Moving forward she obtained her Registered Nursing Degree in 2002. In 2014, Stevi earned her Master’s Degree in Nursing Education. She obtained her dream job when she was appointed to the College of Nursing (CON) in April 2019, and taught the simulation component of numerous CON courses across programs, mentored students, facilitated groups who visited the CON Simulation Center, and more. Stevi was instrumental in founding the Utah Simulation Coalition, and worked tirelessly to develop and offer simulation training throughout Utah as service to the profession. She received honors from the U of U College of Nursing in 2016, 2017, 2018 and 2019. Stevi also loved to travel. She was always eager to grab her passport and head for the airport with friend Lu, her frequent cohort in crime. Her other many varied travel companions will always cherish their memories of joining her on her adventures. Stevi’s sudden departure and final adventure took place on February 8, 2021 when she traveled from this life to the next. Though reeling from our loss, we are clinging to our many happy memories of our daughter, sister, grand-daughter, niece, god-mother, colleague and friend. She will be deeply and forever missed. Stevi is survived by her parents Ric and Patti, sister Erica (Toni), grandparents Dena Espinoza and Nick (Vi) Flores, aunts, uncles, god-daughter, family and close friends and treasured colleagues and students. A celebration of life for Stevi is currently being planned for September 19, 2021 – details will follow. Should you want to honor Stevi’s memory, please consider donating to the College of Nursing Scholarship Fund in her honor. https://tinyurl.com/stevigire

Whether you knew her as Stephanie or Stevi, you couldn&#8217;t forget her. Stevi didn&#8217;t have friends she had &#8220;families.&#8221; There was little she was afraid of trying and nothing she would not do for those she loved. Stevi barreled... View Obituary & Service Information

The family of Stephanie Lynn "Stevi" Gire created this Life Tributes page to make it easy to share your memories.

Whether you knew her as Stephanie or Stevi, you couldn’t forget...