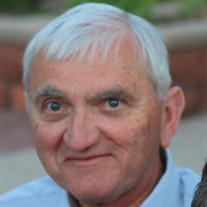 Stephen Horst Kleinlein April 13, 1938-June 14, 2021 Our father, husband, grandfather, great grandfather, and friend, Stephen Horst Kleinlein, passed away on Monday, June 14th2021, at home. Stephen was born April 13, 1938, in Nurnberg Germany to Konrad and Louise Kleinlein. His family immigrated to the United States in 1954. Stephen graduated from South High School and went on to attend the University of Utah. He enlisted in the US Army and was stationed in Seattle as a radar repairman where he served for three years. He married Karen Elfors and they had five children, Bart, Steven, Brenda, Dennis, and Brian. Stephen and Karen later divorced. In 2005, Stephen married Naomi Wingate further increasing the size of his family. Stephen worked as an electrical engineer for many years with computerized stage lighting systems. Stephen has been a licensed Ham radio operator since 1974. Stephen loved the outdoors. He loved to fish and hike with family and friends. He loved to travel, especially to out of the way places. He is survived by his wife, Naomi Kleinlein, children, Bart Kleinlein (Stephanie), Steven Kleinlein (Shauna), Brenda Kleinlein, Brian Kleinlein, James Wingate (Sherrie), Becky Christensen (Spencer), nine grandchildren, nine great-grandchildren (with three on the way), and eight step-grandchildren. A graveside service will be held Friday June 18, 2021, at 11:00 a.m. at Valley View Memorial Park, 4335 West 4100 South, West Valley, Utah. Stephen was loved and will be missed by all who knew him.

The family of Stephen Horst Kleinlein created this Life Tributes page to make it easy to share your memories.