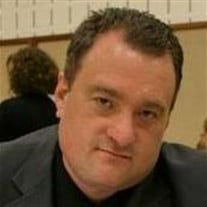 Stephen Nels Schulkins Stephen Nels Schulkins, 44, passed away peacefully in his sleep Saturday, August 20, 2016. He was born in San Jose, California On September 10, 1971 to William and Elinor Schulkins. He was married to Tanya McPherson and later divorced. He helped her raise her two children, Samantha and Sheila Whom he loved dearly and missed greatly. Stephen loved being around people especially family. He had many challenges in his short life that were overwhelming, But he tried with all his heart to overcome them. He was preceded in death by his father, William Schulkins, Brother, Donald Dewoody, and sister, Colleen Dewoody. He is survived by his mother, Elinor Schulkins, brothers Roger Dewoody, and Larry Schulkins (Cindy), and sisters Susan West (Lee West), Joyce Fultz (Bob), Sharon White (Steve), Debbie Sullins (Rob), and many nieces And nephews whom he dearly loved. We miss you Stephen, and know that your earthly struggles are Over and you have found peace.

The family of Stephen Nels Schulkins created this Life Tributes page to make it easy to share your memories.