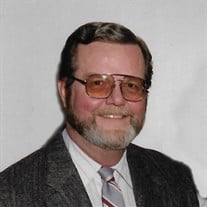 On Wednesday, July 31, 2019, Stephen Douglas Schultz, husband, father, grandfather, and great-grandfather, passed away peacefully at the age of 76. Steve was born on June 17, 1943 in Provo, Utah to William F. and Elizabeth Brandley Schultz. He graduated from Olympus High School in Salt Lake City in 1961 and later attended the University of Utah. On April 6, 1968, he married Connie Peterson in Brigham City, Utah. Together they raised four children, S. Matthew (Sherree), Centerville; Hillary (Bob) Lundgreen, West Haven; Mindy (Rob) Secor, Clinton; and Angie (Jeff) Kindall, Clinton. Steve was blessed with 14 grandchildren and one great-grandchild (with another on the way). After beginning his work as a patent draftsman with Morton Thiokol, Steve had a diverse career path ranging from water chemistry to sales. It was his passion for creating good food that led to his favorite career choice--owning and operating Grandma’s Country Kitchen Catering with Connie. Anytime someone remarked that the food was delicious, he always replied, “I only make good stuff!” Steve was preceded in death by his parents. He is survived by his wife and four children, brothers John (Susie) Schultz and Greg (Carol) Schultz, and sister Stephanie English. Funeral services will be held Tuesday, August 6, 2019 at 11 am at Premier Mortuary, 5335 S. 1950 W., Roy, Utah. Viewings will be held Monday, August 5 from 6:00 to 8:00 pm and Tuesday from 10:00-10:45 am at the mortuary. Interment, Clinton City Cemetery. The family would like to thank Bree and Christina and the rest of Comfort Worx Hospice for their compassionate care of Steve over the last several months.

The family of Stephen Douglas Schultz created this Life Tributes page to make it easy to share your memories.