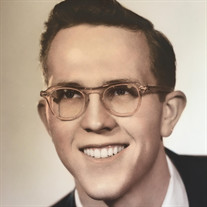 Sterling Gee Loveland passed away Friday, January 27th after a brief illness. Sterling was born November 26, 1934 in Idaho Falls, Idaho to Harold “King” Loveland and Jessie Fern McGavin. He was the youngest of their four boys, His older brothers were: Jerry, Dick, and Emerson. He spent his growing-up years in Idaho Falls, Ogden, Logan, and Provo, Utah. He graduated from Brigham Young High School in 1952. He attended Brigham Young University and graduated with a degree in Accounting in 1960. He served a two and a half year LDS mission to New Zealand, which was one of the highlights of his life. He loved telling, and we loved hearing, the stories of his mission with a few Maori words thrown in for good measure. After his mission, while attending BYU, he met his future wife, Joyce Bullock, on a blind date. They were married on August 14, 1958 in the Salt Lake Temple. Together they had five children: Sue Ann, David, Lisa, John and Rebekah. They lived in Provo, Brigham City, Price and Orem, Utah during the next 26 years with a few years spent in Orange County California as well. Sterling worked at a variety jobs during his career. They ranged from accountant, dairy farmer, insurance sales, city recorder, nursing home administrator, owner and head baker of Loveland Bread, to bus driver and transportation manager. After Joyce’s death in 1987, Sterling met and married Shasta Shipp Hamilton. They were married June 17, 1988. Sterling became a step-dad to Shasta’s three grown children: DaNett, Kurt, and Dana. During their marriage they moved to Glendale, Arizona where they opened and operated Loveland Bread for several years. Shasta passed away on December 31, 2003. After Shasta’s death he purchased a motor home and enjoyed spending time with the kids and grandkids going on several road trips. In 2012 Sterling moved back to Utah to be closer to his family. He enjoyed living at West Jordan Senior Housing where he made many new friends. After a fall in February 2016, he spent several months in rehab care where he was a staff and resident favorite. He moved to Sunridge Assisted Living in November of 2016. He loved living at Sunridge and celebrated his 82nd birthday there in November with family and friends. Sterling was a member of the Church of Jesus Christ of Latter-day Saints and had a strong testimony. He served in many church callings during his life. He especially enjoyed the time he served as scoutmaster and the years he served as stake clerk. He was a great sacrament meeting speaker and used very few notes. His favorite church calling was when he and Shasta served as nursery leaders for many years. Sterling was preceded in death by his parents, his wife Joyce, his wife Shasta, his brothers Jerry and Dick, and his daughter-in-law Jan Loveland. He is survived by his children: Sue Ann (Bryce) Bodily, David (Arva) Loveland, Lisa (Paul) Hammer, John (Dustie) Loveland, Rebekah (Dan) Ames as well as daughter-in-law Melanie Loveland. He is also survived by his brother Emerson (Helen) Loveland, step children DaNett Coy, Kurt (Connie) Coy, and Dana (Roger) Eusebio. He leaves behind 18 grandchildren and eight great-grandchildren as well as many nieces and nephews. His family is grateful for the loving care he received from the staff at Sunridge Assisted Living and Cornerstone Hospice during his illness. Funeral services will be held on Monday, January 30th at 2:00 PM at the LDS chapel located at 4825 W. 7000 S. West Jordan, UT 84084. Friends may call from 6:00 to 8:00 PM at the church on Sunday January 29th, and Monday from 12:30 to 1:45. Interment will be at the Roy City Cemetery.

Sterling Gee Loveland passed away Friday, January 27th after a brief illness. Sterling was born November 26, 1934 in Idaho Falls, Idaho to Harold &#8220;King&#8221; Loveland and Jessie Fern McGavin. He was the youngest of their four boys,... View Obituary & Service Information

The family of Sterling Gee Loveland created this Life Tributes page to make it easy to share your memories.