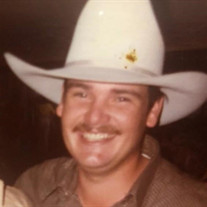 Steve Dawson Howard was born September 23, 1961 in Shreveport, LA. He was the third child born to James and Janet Methvin Howard. Steve’s parents divorced when he was toddler. Steve had the pleasure of growing up on his grandparents cattle ranch in the midst of his grandparents, mother, siblings, uncles and many cousins. He loved working alongside his Papa, uncles and cousins on the ranch. He acquired his love of ranching, and a dream of having his own ranch at an early age. Steve moved to Orem, Utah with his family when his mother began teaching at BYU. Steve attended schools in Orem and participated in youth baseball and football. Steve looked forward to spending each summer in Louisiana working on the family ranch and spending time with his cousins. He enjoyed being in the outdoors,riding horses, scouting, and FFA. Steve also played bass guitar in a rock band. Steve graduated from LDS Seminary and Orem High School in 1979. After high school Steve worked on his uncle’s cattle ranch in Kansas and tried his luck in rodeo. His favorite events were saddle bronc, team roping, and cutting. Steve returned to Utah and worked as a farrier. He met his wife, Nancy Hansen, on a blind date. They married February 4, 1983 in the Provo Temple. They lived in Florida, Texas, Nevada and Utah on cattle ranches. Steve loved working with livestock. Steve and Nancy welcomed their first child, Haddie, while living in Florida. Burke was born three years later in Provo, UT. Steve and Nancy settled in Benjamin in 1993. They loved this beautiful farm community. They welcomed two additional daughters into their family, Harlee in 1994, and Payden in 1997. Steve was a very devoted father and enjoyed watching and coaching his children in baseball, softball, football, karate, rodeo, and tumbling. Steve worked in metal farbrication and was a Certified Welder. He worked many years as farrier. He was a certified farrier by the American Farrier Association. Steve was very social and enjoyed being around people. He made friends easily and would often strike up a conversation with strangers. Steve enjoyed dancing, playing guitar, singing, riding his horses, cooking, forging, golfing, camping, listening to music, and being with family and friends. Steve reported a death experience following a car accident in August 2007. He reported being in the presence of the Savior and several family members. He reported feeling overwhelming joy and love. Steve had a testimony of our Savior Jesus Christ. Steve served in several LDS church callings with his favorite being working as a scout leader. Steve had a very kind and gentle side. Steve was known to drop what he was doing to help a friend fix a fence, haul cattle or buffalo, change a tire, deliver a calf, herd cattle, move, or any other needed task. He was also known to have a temper and use foul language at times. Steve had a brain tumor removed in December 2007. He had a stroke post-operatively. Steve’s life changed drastically after this. Life also changed for his family members. Steve had a seizure disorder and developed liver disease. Steve’s mother and stepfather, Ralph Tuten, were loving caregivers to Steve for several years while Nancy was at work. After several years of hard work, Steve was able to return to some activities that gave him joy including forging, cooking, wood carving, playing guitar, napping arrowheads, and riding his specialized bike. He liked to give knives, walking sticks, and arrowheads as gifts to special people in his life. Steve also liked to cook Jambalaya or Gumbo and share it with neighbors. Steve enjoyed listening to scriptures on his telephone. Steve had several ups and downs with his health since his stroke. Each time, with the help of his family, he worked hard to recover. Steve’s health began to deteriorate in February. He was placed on Hospice in June. Steve was surrounded by family for several days prior to his death. Steve passed away while in the embrace of his youngest daughter, Payden, and with other family members at his bedside. Steve loved his family dearly, and Steve was loved dearly by his family. He was always there for his children. Steve was quick to forgive. Steve will be missed by his family. “Someday when we meet up yonder, we’ll stroll hand in hand again.” Willie Nelson Steve is survived by his mother Janet Tuten of Lehi, his wife Nancy Howard of Benjamin, children: Haddie Howard of Benjamin, Burke Howard (Keri) of Benjamin, Harlee Frantz (Chirs) of Spanish Fork, Payden Howard of Benjamin. Sister Kim Lowe (Ron) of Orem, and brother Ben Howard (Becky) of Draper. Steve is survived by six grandchildren: Madelyn Huntley, Quaid Howard, DeKlan Howard, Orelia Howard, Kendall Howard and Trey Frantz. Steve is also survived by step-siblings: Nancy Brough (Don) of Gilbert, AZ, Kirby Tuten of Acworth, GA, and Eric Tuten (Alexandria) of Slippery Rock, PA. Steve was preceded in death by his step-father, Ralph Tuten who passed a way last month at the VA nursing home in Payson, UT, and by grandparents Benjamin and Orelia Methvin of Natchitoches, LA. Funeral services will be held Saturday, June 22, 2019 and the Benjamin Church at 7300 South 3200 West. A Viewing will be held from 10:00 to 10:45. The Funeral will start at 11:00. Steve will be buried in the Benjamin Cemetery.

Steve Dawson Howard was born September 23, 1961 in Shreveport, LA. He was the third child born to James and Janet Methvin Howard. Steve&#8217;s parents divorced when he was toddler. Steve had the pleasure of growing up on his grandparents cattle... View Obituary & Service Information

The family of Steve Dawson Howard created this Life Tributes page to make it easy to share your memories.