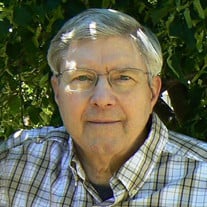 Steven Edward Bash passed away peacefully in his sleep in the early morning of August 1, 2016 after an extended illness. Steve was born on December 2, 1944 to John William Bash and Dorothy Jean Krugh Bash on Stuttgart Army Air Force Base in Arkansas. In his early years Steve began a love for all things electronic that became his passion for the rest of his life. Steve attended BYU where he met the love of his life, Susan Pauline Fuller. They were eventually married for time and all eternity in the Los Angeles Temple on June 4, 1966. He graduated from BYU with a degree in communications in 1968. Steve and Susan moved to Phoenix shortly after graduation and Steve began working for the television station KPAZ. Steve was offered a job at BYU with instructional television in 1973 and the family moved back to Orem, UT. Steve also worked at Skaggs Telecommunications Services for 25 years and in 1993 started his own business, Electronic Things, Inc. Steve had a great love for the outdoors that he passed on to all of his children. He was a ham radio operator holding an Extra Class license and spent many weekends each summer serving as a volunteer on the Timpanogos Emergency Response Team. Steve was a member for over 10 years and helped many injured hikers off the mountain to safety. While Steve’s key may now be silent, he will never be forgotten and his beacon will continue to delight and amaze us all. 73, WZ7L. Steve is preceded in death by both of his parents John and Jean Bash. He is survived by his wife Susan, his sister Jill (Galen) Pehrson, Frisco, TX and his children Michelle (Chris) Hammock, Kissimmee, FL, Melissa (Andrew) Shaw, Idaho Falls, ID, Michael (Christy) Bash, Orem, UT, Jeremy (Mindy) Bash, Lawrence, KS, Jared (Staci) Bash, Eagle Mountain, UT and Justin Bash, Orem, UT. He is also survived by 19 grandchildren and many other relatives that will miss him dearly. Funeral services will be at 12 noon on Saturday, August 6, 2016 at the Aspen 2nd Ward building. Visitation will be from 10:30 a.m. to 11:45 a.m. prior to the services. Interment will follow at the Orem City Cemetery.

Steven Edward Bash passed away peacefully in his sleep in the early morning of August 1, 2016 after an extended illness. Steve was born on December 2, 1944 to John William Bash and Dorothy Jean Krugh Bash on Stuttgart Army Air Force Base... View Obituary & Service Information

The family of Steven Edward Bash created this Life Tributes page to make it easy to share your memories.

Steven Edward Bash passed away peacefully in his sleep in the...