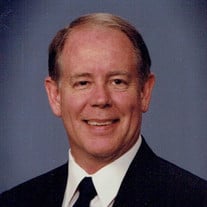 Steven Douglas Bunnell 1945 - 2018 Steven Douglas Bunnell of West Valley City, Utah, passed away peacefully after a battle with Parkinson's disease on Monday, October 8, 2018 in South Jordan, Utah. He was 73 years old. Steven Bunnell was born in Price, Utah to Omar and Helen Bunnell on January 26, 1945. Steven was the youngest of four children and grew up in Price, Utah surrounded by a large extended family. Many fun times were spent working with them in their family business at the Bunnell Garage. Steven served as a missionary for the Church of Jesus Christ of Latter-day Saints in the Southwest Indian Mission where he learned to speak the Navajo language. Steven received a Bachelors in Social Work at Brigham Young University, a Masters of Social Work at University of Utah and a Doctorate of Philosophy in Educational Leadership at Gonzaga University. During his career he worked for LDS Social Services along with many other behavioral health organizations. As a social worker he was dedicated to helping others and blessed the lives of many people. Steven was a very creative, deep thinking and adventurous man. He was an avid writer. He wrote three different works on addiction recovery along with several other stories about his life, tall tales and fictional stories. Steven was known for being an inventive story teller and never let the truth get in the way of a good story. Steven is a very accomplished musician and writer. He played the piano beautifully, a talent he taught himself. He also was interested in people and their life stories which led him to producing many biographical videos in his later years. He loved his family above all else. He and Rae Lee raised their eight children in Spokane, Washington. Some of their greatest memories involved fun family traditions, including boating and camping adventures. They always had a wonderful time waterskiing, fishing and playing in the sand. Steven is proceeded in death by his wife, Karyn Bunnell, his daughter Rebecca Bunnell, his brother David Bunnell and his parents Omar and Helen Bunnell. Steven is survived by the mother of his children, Rae Lee Bunnell and their children, Ann (Manuel), Amy (Mike), Sam (Tonya), Laura (Curtis), Sarah (Peter), David (Kristin), Rachel (Jeremy); 28 grandchildren, Andrew, Annalisa (James), Angalene, Corinne (Kade), McKayla, Braydon, Rebekah, Gabriella, Samuel (Reilly), Kyle, Tyler, Eric, Kenyon, Brynn, Cash, Summer, Cody, Cameron, Laney, Leah, David O., Harper, Grace, Teagan, Paige, Thayne and Morgan; 2 great- grand children, Henry and Basin. He is also survived by his two beloved sisters Mary Helen Powell and Ann Mathis (Bill) and many cousins, nieces and nephews. A memorial in his honor will be held at the Church of Jesus Christ of Latter-day Saints at 6pm on Sunday, October 14, 2018 at 3900 South 4000 West, West Valley City, Utah. There will be a graveside service 11:30 am, Monday, October 15, 2018 at the Scofield Cemetery in Scofield, Utah.

The family of Steven Douglas Bunnell created this Life Tributes page to make it easy to share your memories.