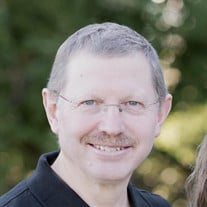 Steven Earl Eatchel 1963 - 2018 Steven Earl Eatchel, also known as “Superman”, passed away peacefully on September 2, 2018, at the age of 55, surrounded by his devoted family, after an eight year courageous battle with Adenoid Cystic Carcinoma: a rare, resistant and relentless cancer. Steven was born on June 26, 1963 in Oakland California to Milton and Marian Eatchel and was the youngest of six children. He was raised in Fremont, California and attended Oliveira Elementary, Thornton Jr High and graduated from American High School in 1981. Steven served a full-time mission for the Church of Jesus Christ of Latter-day Saints in the Nagoya, Japan mission from July of 1982- December of 1983. After returning home, he attended Ohlone College, transferring to Canada College in Redwood City and graduated with an AS degree in Ophthalmic Optics and an AA in General Education. Upon his graduation Steven returned to Japan to teach English to students for a while and then returned home to attend Cal State Hayward University (renamed Cal State East Bay) and then one night while attending an LDS Institute class; he met the best woman in the world: Renee Eckhard, who happened to be sitting across the table from him. One look from her and he had a spiritual confirmation that she was the one he would marry. She had the same confirmation and the two fell deeply in love and were married in the Los Angeles LDS Temple on May 20, 1989. That was the best day of his life! The couple moved to Turlock, California, where Steven worked as an Optician and graduated from Cal State Stanislaus with a BS in Business Administration. They started their family in Turlock with their first child. The couple moved to Fremont, California and added another child while Steve continued as an Optician until moving to Eureka, California to work as a Store Manager for Sears Optical and there they added 3 more children. He was also Vice President of Marshall Elementary PTA and a member of the Board of Directors of the Redwood Coast Regional Center, an organization that funded the needs of special needs children. Eventually they felt a pull to Utah, so in 2003 Steven moved his family to Harrisville, where Steve worked as a Contact Lens Specialist for Country Hills Eye Center and then Utah Eye Centers and then in 2010 was diagnosed with Adenoid Cystic Carcinoma. He was a patient at the Huntsman Cancer Institute in Salt Lake City and over the next eight years bravely participated in many difficult chemotherapies, radiation treatments, clinical trials and surgeries too numerous to count. Steven held many varied callings in the church but his favorites were ones where he could directly teach and serve others. He was always genuinely grateful for everything he had and anything anyone did for him. He loved the gospel and teaching others about it. He was always humble, strong and a perfect example of humility. Even during the most difficult times of his cancer, Steven never complained but had a smile on his face and an optimistic attitude. Steven’s greatest joys in life were his wife and children. He loved being together as a family and enjoying the simple things in life. He loved traveling, even if it was just driving around the neighborhood and anytime the family got in the car and asked where they were going, he would always say “Crazy!” He loved going to the temple, serving others, watching sci-fi movies, playing games, making people roll their eyes at his bad dad jokes, and reading his arctic explorer books. He loved gardening and being outside, sports—especially baseball and basketball and just spending time with his sweetheart. Steven loved people. He had a gift of sincere love and friendship for everyone he met. He was the definition of a true friend. He could overlook the bad in anyone and see the good that others couldn’t see. He had many friends and made friends easily. You couldn’t help but like Steven and want to be his friend. Steven will be greatly missed by all who knew him. Steven and his family would like to thank the many doctors and nurses at the Huntsman Cancer Institute for their care, as well as the many friends and family for their support and love. Steven is especially grateful to his loving wife and children and his brothers for their unfailing love, support and care. Steven is survived by his beloved wife of 29 years, Renee and their five wonderful children: Daniel Eatchel, William Eatchel, Clarissa (Quade) Standley, Timothy Eatchel and Amanda Eatchel. Funeral services will be 11:00 am, Tuesday, September 11, 2018 at the Harrisville Stake Center, 1560 North 200 West, Harrisville, Utah where a viewing will be prior to services from 9:30 to 10:45 am. Interment in the Ogden City Cemetery. In lieu of flowers, the family asks that a donation be made to the Huntsman Cancer Institute in loving memory of Steven.

The family of Steven Earl Eatchel created this Life Tributes page to make it easy to share your memories.