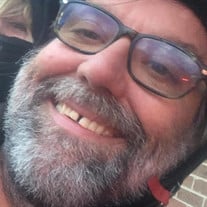 Steven John Hinman 1967 - 2019 Steven John Hinman was born June 15, 1967 in Akron, Ohio and died March 23, 2019 at age 51. He was the son of Janet Rae Brooks and Michael John Hinman. Steven is survived by his father and stepmother, Mike and Kathy Hinman, brothers Bob and Pat Hinman and their families. Also, his love of 23 years, Jackie Morehead, one step son, Robby Morehead, married to Regina Celic and two grandbabies, Charlie and Eli Morehead. Steven was a largely self taught computer “get it done” technician. He was currently employed by CDK Global where he learned to love the challenges and the people. He had, as well, earned his PMP certificate and was affectionately dedicated to participating as hardware specialist in the annual Sturgis event. In his twenties Steven joined the Army and served in Germany and West Point. After his time in the Service he returned to Ohio for a short while, then moved to the North Carolina coast where he and his mother relished in owning and operating a kite shop. Steven loved skiing with Robby and the grandbabies. He was an avid motorcycle rider, especially in blinding snowstorms. He was a natural with nature, from diving into Atlantic breakers, staring at birds for hours and cruising the canyons of the Rocky Mountains. He arranged his life and resources to care for Jackie and her family. He will be lovingly missed. Thank you, Steven, for the tasty dinners, the patient leg and foot rubs, the late night trips to Harmons for Cokes and ice and the hard fought art of making up after a disagreement. (That last one was tricky for both of us.) As well, a dear thank you for your attention and love of the “invisible” people and of course, again, your devotion to me and what became your family. I will love you all my days. Jackie—known to you as EJSM.

The family of Steven John Hinman created this Life Tributes page to make it easy to share your memories.