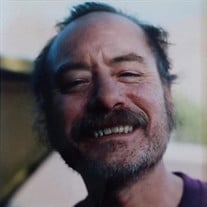 Steven Cornelius Roestenburg (October 2 1953- June 20, 2020), also known as "Rosto" by many old-time friends, passed away peacefully at his home with his sister at his side. Rosto was a talented musician who jammed with his "Loose Trucker" friends in his earlier years. He taught himself to play the guitar, mandolin, banjo, piano, and harmonica, to name a few. He also composed his own music and lyrics, and played at varies venues. His musical talent inspired many generations and will never be forgotten. Throughout his life he went on countless river and backpacking trips, always bringing his guitar with him. Coyote Gulch, San Rafael, and Green River, to name a few. Always the entertainer with an open door and a listening ear, he welcomed old friends to visit anytime. He saw the positivity and humor in life, and was incredibly friendly to anyone he encountered. His musical soul, kind heart, and positivity were contagious and noticeable by everyone. During his last couple of weeks in this world, his friends and family reminisced with him about all of fun times they had over the years. His neighbors say they will forever miss his smile and wave from the porch, or scooter as he would ride by on his daily shopping trip. He was a patient, sweet, and happy presence. Addiction is an unfortunate disease of despair, and although his physical body eventually succumbed to the effects of alcohol and tobacco, his mind and soul never wavered from the kindness and love that made up his core. He was not defined by his addiction, but rather by his compassionate and welcoming spirit. His spirit and soul are now free and “Rockin’ in the Free World” and we have no doubt he will be with us all, especially in nature and through music. He is survived by his two twin daughters, Sadie and Jessica, his sister Jololene Allan, his brother Garon Yoakum, and many nieces and nephews. Plans are being made by family for a Celebration of Life in the future when it is safe to bring everyone together.

Steven Cornelius Roestenburg (October 2 1953- June 20, 2020), also known as "Rosto" by many old-time friends, passed away peacefully at his home with his sister at his side. Rosto was a talented musician who jammed with his "Loose Trucker" friends... View Obituary & Service Information

The family of Steven Cornelius Roestenburg created this Life Tributes page to make it easy to share your memories.