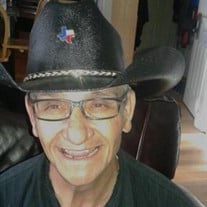 Steven Dee Weaver August 7, 1954-December 20, 2020 Steven Dee Weaver, born August 7, 1954, to Sylvan Weston Weaver and Gayle Smith Weaver, returned peacefully to his heavenly home on Sunday, December 20, 2020. He spent his last moments surrounded by family as they shared stories, sang songs and reminisced about this strong and humble man. He was born in Ogden, Utah, in the same hospital as his future bride, Suzanne Steele Weaver. Steve and Suzanne were high school sweethearts who were sealed for time and all eternity in the Ogden Temple. Pops was a cowboy at heart. He grew up in Ogden but spent his childhood summers in Lewiston, Utah, at his Uncle Ad’s farm. There, he learned the value of a hard day’s work. He spent many hours with animals, particularly horses, and Uncle Ad taught Pops how to operate the farm equipment with very little instruction and a whole lotta trial and error! Steve was a hopeless romantic when it came to Suzie. He loved to spoil her with gifts but could never keep a surprise long enough to give it to her on the intended date. After lots of ruined surprises he finally got creative when he bought her a violin, which she had always wanted. He disguised it by dressing it up like a scarecrow and setting it on the rocking chair. He enjoyed taunting her, knowing she’d love the surprise, while also keeping her questioning what the heck this scarecrow gift could possibly be until the day she could open it. They loved to dance together and even became DJs, and they taught country line dancing to youth groups. Steve taught Suzie many sweet songs, a favorite being “The Sweetheart Tree,” and they’d sing together while out on one of their many long walks. Pops seemed to be everywhere that his loved ones were. He was at every volleyball game, every rodeo, every recital, every event that was important to them. Each of his kids and grandkids has a picture in their mind of him taking great effort to haul his chair, giant mug, umbrella, and snacks for all to make sure they knew he was their greatest fan. Pops was the ultimate family man. He was a teaser, storyteller, protector, teacher and king of one-liners. His expertise in the kitchen was legendary. Nothing compared to his roasts or his turkey. He would be up at all hours of the night babysitting his roast and prepping his famous waffle batter to feed the masses. The payoff of hours around the stove was his seeing his family gathered together tasting the best meal they’d had in their life. Family was everything to Pops. He is survived by—ready for this— Nine children, Cole (Janet) Weaver, Jason (Shelly) Weaver, Sharidee (Jerrin) Wood, Jared (Sara) Weaver, Suzette (Tomas) Severo, James (Tricia) Weaver, Shanna (Anthony) Ford, Jon (Michelle) Weaver, and Shaylee (Justin) Young, and 30 grandchildren, Kylee (Kai), Coleton (Brielle), Whitney (Tucker), Chelsea, Kyler, Logan, Kaydee, Preston, Brock, Kensie, Zachary, Nicholas, Spencer, Ben, Jackson, Tanner, Annabelle, Makinlee, Brayden, Malorie, Macee, Seth, Saidee, Morgan, BrayLinn, Heston, Isabella, William, Atticus, and Steven. Funeral services will be held Wednesday, December 23, 2020, at 11 a.m. He will be interred at Liberty Cemetery following the services. Services will be broadcast at benlomondstake.org. The funeral will be attended by family only, but will be streamed live for the public. The link to the service is (at the top of this page).

The family of Steven Dee Weaver created this Life Tributes page to make it easy to share your memories.