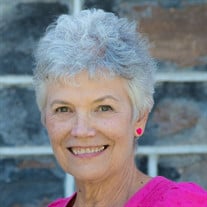 Susan (Sue) Maurine Miller Stockwell 1946-2021 passed away peacefully at home with her husband Bob and beloved daughters Stephie and Annie in the early morning of November 4, 2021 after an evening with her children and some grandchildren in person and electronically. Sue was born on October 12, 1946, in Logan, Utah, to Ruth and Ivan Miller and grew up in a loving and spiritual family well known in Cache Valley for their service and devotion to all things good and praiseworthy. Sue discovered a love for music early in her life when she found, among other more important things, that practicing piano could get her out of doing the dishes. This love of music blossomed into her playing the musical scores for several high school plays and accompanying a men’s chorus lead by her father Ivan throughout Cache Valley. She started teaching piano while still in high school and was teaching several budding pianists up until the final few weeks of her mission here on earth. She attended Brigham Young University and received a degree in Administrative Assistance, excelling in shorthand and typing, and was a Cougarette. During Sue’s freshman year in her English class, she met and for some reason was able to overlook the shortcomings of Bob, the tall Californian who would become her husband. Sue and Bob collaborated on their English papers—he was more creative, and she understood all the rules of composition and could type as fast as he could think—and thus began over 55 years of a partnership of equals with unique personal gifts and a shared vision of eternity that sustained them through the challenges and marvelous opportunities of this Plan of Salvation. They were married in Hyrum, Utah, on May 30, 1966, before Bob entered the US Army and were sealed for time and eternity in the Logan Temple on March 10, 1967, just prior to Bob leaving for a tour in Vietnam. The couple embarked on an odyssey that stretched from Utah to Georgia to North Carolina and back to Utah, then on to California, Montana, Nevada, New Mexico, another stop in Utah before heading on to Washington state, back again to Utah, followed by detours to North Dakota and the high desert of California, before finally settling in Springville, Utah. Along the way Sue gave birth and undying love to six wonderful children: Bob Jr. in Georgia, Matt in North Carolina, and then Jason, Stephie, Annie, and Peter in Utah. Sue touched the lives of so many with her desire to serve wherever she was called – Ward and Stake Relief Society and Young Women President (more than once in each), early morning Seminary Teacher, chorister, Ward Choir Director, organist and finally in her last months as a counselor in the Ward Young Women Presidency and always as a visiting teacher and ministering sister. She served as a temple worker in four temples and organist in the Provo, Utah Temple. She always said yes when a need arose for service, and never stopped seeking ways to serve those around her. Sue’s greatest joy was being with her children, grand and great grandchildren and sharing in their lives whenever and however possible. Surely, she is now preparing the way for each of these beloved children and her adoring husband, and she awaits them being gathered under the Covenant with our Savior Jesus Christ. Sue was preceded in death by her parents Ruth and Ivan Miller, a precious granddaughter Anna Tlustek and a beloved daughter-in-law Kara Stockwell, and is survived by her husband Bob, children Bob Jr., Matthew (Cherstyn), Jason (Marcie), Stephanie (Hein), Annie, and Peter; 32 grandchildren, 9 great grandchildren, her brothers Jeff and Steve and sisters Marsha, Rosie and Jeanette, and a myriad of nieces and nephews. A viewing and funeral service will be held on Saturday November 13, 2021 with the viewing from 9-11 am and the funeral service beginning at 11 am at the Kolob Utah Stake Center 1230 South 500 East Springville, UT 84663. She will be interred in the Hyrum City Cemetery (Hyrum, Utah), later in the afternoon. Premier Funeral Services are directing the details and can be reached at 801-930-9822, www.premierfuneral.com.

Susan (Sue) Maurine Miller Stockwell 1946-2021 passed away peacefully at home with her husband Bob and beloved daughters Stephie and Annie in the early morning of November 4, 2021 after an evening with her children and some grandchildren in... View Obituary & Service Information

The family of Susan "Sue" Maurine Stockwell created this Life Tributes page to make it easy to share your memories.