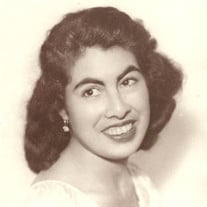 Susana Cabrera Medel 1925 - 2016 Until August 8th, 2016, it seems Susan has always been there. As sister to Jesse, Tony, Mary, Lucy and Joseph, Wife to Albert, Mother to Daniel, Lydia, Linda and Albert Jr. Mother-in-law, Aunt, Grandma, Abuela, friend. She was always proud of her children, loved her grandkids, knew how to dance with a partner she loved deeply and could make the best rice and homemade tortillas in the western United States. She held down the kitchen and wielded a set of crochet hooks that seemed to rarely ever rest. Her story always seemed to be in the background to others but it was more likely the foundation that allowed on which most of those other stories were built. This family couldn’t have done what they did had she not been there at one time or another to nurture, correct, love, feed or just listen. Susana was born to Ynosensio and Julia Cabrera in Salt Lake City on May 24, 1925. She was a middle child and grew up during the worst of the Great Depression. As a child she was stricken with illnesses, including Bell’s Palsy and her poor health kept her home and out of school. Regardless of her academic achievement, she valued education and it showed with all the photos of her children and grandchildren in caps and gowns hung, seemingly hap hazard on the “Graduation Wall” in her living room. Since she was home, she learned to cook, clean, mend and care for younger children. She did it all and still had time to practice her Catholic faith, enjoy music and the chance to spend time with family. It was family time that was always a step up from nearly everything else. Whether it was her immediate family or the extended Cabrera and Medel clan gatherings, it didn’t matter. She was in the thick of it making sure there was food, kids were monitored and all the family news was collected, analyzed and shared. Planting flowers for her or helping in the garden was worth the effort to see how much she loved her yard. Home was her domain. It signified permanence and gave family a place to relax, shelter, return, celebrate and love. Truth be told, patience was not her strong suit in many things, maybe except for cooking fresh corn on the cob, which she would simmer for hours to get it just right for her. However, if it was a fresh melon or strawberries, you had better watch your fingers if you were between her and that dish. She liked to see people happy and just having her around did that for many of us. She grew deaf in her last years and that built a wall between her and many others, you can be sure it frustrated her at times. She loved babies and her 10 grandchildren, 21 great grandchildren and 1 great-great grandchild over the years and sometimes it seemed she had her favorites. But it was obvious they shared a bond at which most of us could only marvel. That bond was strong enough that it was a child who was one of the last to break through the haze that descended over her in those last days. Those of us left behind are once again realizing how much each individual in our life means to us and makes us different and possibly better than we may have been. We cry because we care and maybe because we regret not fully appreciating how important each person in our life is. In the meantime we gathered at her house, in that world of hers that eventually shrunk to the size of a small bedroom, and try to remind both her and ourselves of the details of life that when properly assembled result in love. A Funeral Mass was conducted at St. Francis Xavier Catholic Church on Thursday, August 11, 2016. A graveside service will be held at Valley View Cemetery, West Valley City, Utah on Saturday, August 13, 2016 at 2:00 PM. Friends and family are welcome to return to her house after the service for a light lunch.

The family of Susana Cabrera Medel created this Life Tributes page to make it easy to share your memories.